Hancock Report: A Hundred Miles of Asphalt and Corn 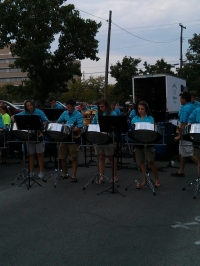 I rolled into Hancock County with a trunk full of bicycle parts and about 1000 copies of the Great Lakes Courier. I was there for the Hancock Horizontal Hundred, the long running classic century tour, organized by the Hancock Handlebars club, through the flat cornfields of Western Ohio. The newspapers were for the nearly 1000 people who signed up for the tour. The bicycle parts were pieces of the bike I planned to ride. You read that correctly: I planned to assemble my bike in a hotel room and take it on its maiden voyage, a century ride, the next day. What could possibly go wrong?

Thanks to Hancock County's noteworthily flat geography, HHH is a great century for first timers. I had ridden a couple dozen centuries back in the day, including a double and several back-to-back centuries. But the last one was well over 15 years ago. So I might as well have been a first timer. Again: what could possibly go wrong?

I found the Red Roof Inn pretty quickly and checked in. Then it was on to the YMCA to find Cory Foust, the ride organizer. With the help of some volunteers, we stuffed newspapers in bags with route maps, ride patches, rider numbers, meal tickets, and the rest of the details that commonly go with century tours. We sat in a circle, telling tales of past rides, and talking a bit about the city of Findlay. Foust recommended a new pub on the main drag for dinner. They served the very local Findlay Brewing Company's IPA. I filed the information away for later, and went back to the hotel to put together my bike.

It wasn't a new bike, with all parts included in the box. It was a 25 year-old steel frame, with parts I gathered after patrolling Craigslist for months. The headset, bottom bracket, and crankset were installed, but that was about it. So I began the assembly. Allen keys. Check. Rear derailer. Check. Front derailer. Check. Brake calipers. Shifters. Bars. Stem. Brake levers. Seatpost and seat. Check. Newspaper on the carpet to catch any grease. Chain installation. Tinker, tinker, tinker. Check. Finally it was time to put on the brake cables--and to discover the parts I didn't have. I knew I'd need handlebar tape, but those little ferrules that slip over the cable--where the cable housing meets the brake lever--that was a detail I had forgotten. And the brakes were worthless without it. So I was off to Muddy River Cycles for a bit of shopping. Then back to the Y for registration.

Rider Registration made for a happy scene, with cyclists from several states checking in and seeing old friends. Half a dozen bike shops, including Century Cycles, greeted riders and sold some last minute supplies. I chatted with Century proprietor Scott Cowan. I saw Kathy Armada, Laura Losey Faulkner, and Kristine Lemasters sporting Bike Cleveland T-shirts. I also picked up some kind of energy goo, one of those concentrated nutrition and calorie products that are supposed to help your ride or marathon go better. Listen, I'm closing in on fifty. I need all the energy I can get.

Back at the hotel I installed brake cables and took the bike on a test ride around a few blocks. All the gears were functioning properly. Brakes were tight. The only thing was the position of the brake levers on the bars. An easy fix. Then bedtime.

The hotel phone rang its wakeup call promptly at 6:30 a.m., which was important, because the Hancock Horizontal Hundred comes with a pancake breakfast. And that's important, because nobody wants to run out of fuel on a hundred mile ride in rural Ohio, SAG wagon or no.

There's no mass start for this ride. You just set off when you're ready. So the riders trickle out steadily in their own time, until all of them get on the road. As soon as they get beyond the city limits, they're in corn fields. The map shows HHH to be a jigsaw puzzle piece of zig zag turns on tiny little county and township roads, and hardly any of them have names.

Many of the roads are just a single lane wide, and for miles on end we'd hardly see a single car. Still, riders had to be careful approaching intersections. The corn fields run right to the corners of the roads, even closer than buildings in the city, and the stalks are uniformly about eight feet tall, so there's no way to see if a car, truck, or tractor might be speeding along the crossroads, hidden behind all that produce. "Clear," the riders would call out as soon as they could see well enough to report.

With expectations based on my solo rides, I figured I'd be happy to finish 100 miles in 6 hours. For the first part of the ride I fell in with a couple of guys whose pace felt right to me. We took turns at the front. Stopped at a rest stop. Picked up another guy from the Orville club. Then Orville and I looked around and found that those other guys had dropped back. We rode on.

After a half hour stop for lunch at Arlington High School, we got back out on the road. We had just fallen back into a groove when a ten-man pace line blew by Orville and me like a locomotive. Another rider nearby responded to their speed like this: "Don't you just want to kick them?" Spoken with awe and admiration.

But after a few hundred yards, I was tantalized by the echelon out front of us. They were getting farther ahead, sure. But if we got on behind them, it'd be like riding behind a truck. "Let's go," I said. And Orville and I put our heads down and began to push harder. It took a couple miles of hard work, but there's just about nothing as satisfying as bridging that kind of gap and ducking into the paceline's slipstream as a reward. This crew was working together, pushing hard, and with a dozen of us now in the mix, we were moving significantly faster than any of us as individuals would. My goal of a six-hour finish suddenly looked well within reach.

The wind in western Ohio typically comes out of the West, but on Sunday, September 6, 2013, it was going the other way. For about a ten mile stretch around mile 70 or so, we found ourselves with a tailwind, moving at about 23 miles per hour. We weren't that fast after the turn north, but still the pace line fell into an echelon, taking one mile turns at the front. I was working hard just to stay with this crew and not embarrass myself. It felt great. Then came the turn back east, straight into a headwind. Some miles went by. I took my shift at the front, pushing to keep the speed up. Then I took my break and suddenly found myself straining to stay on the back. And at about the 90th mile, I let the pace line go. I watched them, with the wind in my face, getting farther and farther ahead, knowing I'd never catch back on.

I finished the century by myself, still pushing for speed, but only a little bit. I rolled over the I-75 overpass, the highest hill in the Hancock Horizontal Hundred. A climb of maybe 18 feet.

Back at the YMCA finish line a small cheering section greeted all the riders as they rolled in, banging a cowbell, blowing party whizzers, and shaking pom-poms. I looked at my phone: riding time, five hours and thirty-one minutes. Half an hour faster than I'd hoped. My new bike, assembled the night before, had performed flawlessly. What were the odds?

At this point, the organizational strengths of the Hancock Horizontal Hundred are worth noting--and not because I was in a good mood. The course had been extremely well marked. The Y offered showers to all riders. Towels were available, if you hadn't brought your own. Every aspect of the ride ran as smooth as the asphalt roads. So will I come back for another century next year? What do you think?