WILL THE CHALICE RETURN TO CLEVELAND? #RustCrown 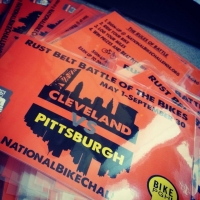 It is time. TO CELEBRATE.

You have been riding your bicycle in the name of the Rust Crown for months. 5 months to be exact. You have dutifully logged your miles in Endomondo. You have encouraged your friends and family to join in the challenge. You have participated in forums. You have discussed the miles. The points. The fact that you would do anything short of implanting a cyclo chip in your dog's skull to beat to beat Pittsburgh at something Cleveland definitely knows better: BIKES.

But have your efforts paid off? Did Cleveland win?

The Rust Belt Battle of the Bikes has come to a close (as of October 1st, that is). Over the past month we have seen a neck and neck race, which for many, was a happy surprise. (unless you are Pittsburgh... Read a little more about it from the League: http://bikeleague.org/content/cle-vs-pgh-neck-and-neck-final-nbc-stretch)

According the article above and as seen on www.rustcrown.org, Cleveland had pushed its way past the City of Bridges in miles and started the many droplets of sweat that ran down the foreheads of cyclists all over the Burgh. But did we do enough?

Well, it’s time to find out.

The scores are calculated behind the scenes (by those dedicated and awesome people at Bike Cleveland and by those almost as awesome, yet just as dedicated people at Bike Pittsburgh) by extracting the points from all cyclists in each region then adding them together to create the overall total for each "city". Yup…that’s right. It’s regional. (you knew this)

So don’t take the points reported via Endomondo at face value, got it? You might be surprised.

So. Wait. Who won? At the time this article is being written (which, btw, is before Oct 1), that is still an unknown. BUT…what is known? Is how we are gonna CELEBRATE! Yup. You heard that correctly. Celebrate!

Instructions:
Sign up for the challenge, allow to mature into battle. Log miles. Mark calendar for October 18th. Head to Youngstown. (it is neutral ground, after all). Meet many cyclists at the Boxcar Lounge at 3pm. Fill tummy with BBQ. Fill glass with Rust Belt Brew. Discover winner. TOAST and be crowned!

Then: continue to celebrate.

Invite your pals. Your family. Your neighbor's pet parakeet. It’s all good. Just call in sick on the 18th, and head on down to Youngstown and show some love for something you had a huge part in! The very first year of the Rust Belt Battle of the Bikes happened because you rocked it. Now? You deserve a little recognition, doncha think? Join our “pals” from PGH as we take over the YO and show them that Cleveland indeed rocks…and ROLLS.

Do it. Or else I will stick a Steelers spoke card in your wheel.

Keep your eye out on Facebook for the official event:
https://www.facebook.com/RustCrown

*Interested in riding there? A non-affiliated, non-supported you-must-be-able-to-read-a-cue-sheet-and-maintain-at-least-15mph-for-70-miles-and-figure-out-how-you-are-getting-back ride is being planned from CLE to meet those riders coming from PGH and all who are joining via their 4 wheeled transportation. If you are interested, email RustCrownCLE@bikecleveland.org to get on the list for info.