Taking a century to turn 40 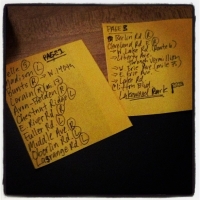 “How do you want to celebrate your birthday?” my friend Katie asked.

And just like that, we were planning my first century ride.

We settled on Sunday, Aug. 18, two days after my 40th birthday. I created a Facebook event page. The invitation read, “This is a joy ride to celebrate friendship, bikes and aging with grace and purpose.”

In addition to Katie, two other riders, Austin and Frank, decided to come along. We planned to leave from Lakewood Park. We would head southwest to Oberlin, northwest to Huron, and east from there to Cleveland.

That morning, we arrived a rag-tag bunch. Austin was riding a bike whose make I could not identify. He wore a striped, wool jersey with the sleeves cut off. Frank, a fixed-gear rider, was riding one of my geared bikes, wearing swim trunks and a fanny pack. Katie, probably the strongest rider in the group, rode a steel Mercier with a bent frame and sketchy rear derailleur.

We set off from Lakewood Park toward Lorain Avenue. The streets were still quiet, and the neighborhood was waking up. There was no direct sun, just warm beams of light falling through the old trees. Our pace was inconsistent. Conversation was of the still-need-coffee variety.

Once on Lorain, we had a whole lane, and traffic left us alone. We talked about jobs and furniture and cars and bikes and food. Eventually, we found our pace and the city began to fall behind us.

We arrived in Oberlin at about noon and in good spirits. Our friends Sam and Nate meet us for burritos. Lunch seemed to take forever.

“Ride fast; take risks,” Nate hollered as we got back on our bikes.

The weather was perfect as we pulled out of Oberlin, ever-so-slightly overcast, 68-ish. Road conditions were as follows: smooth, windless, flat, country, and almost completely without cars.

We had about 65 miles to go, and riding was about to begin in earnest.

For the most part, Katie set the pace, and it was not one for weak legs. Every time she shifted, I thought her bike was going to fall apart, but we were burying what felt like endless miles.

The route was ideal. There were no climbs to speak of. We passed farms and small towns. For long stretches, we felt like we were in the middle of nowhere. We stopped for salty snacks and drinks now and then. Katie preferred diet cola; Frank took an offer of water from a hose along the way. We got lost twice.

When I first started riding a bike, about a year ago, I would wax poetic about its effects.

I have since come to learn that turning the cranks over and over and over and over is cycling’s truest reward. In that repetitive act of muscle memory, the mind stops talking, time stops passing and you are, in a sense, an empty vessel. Things get quiet and still.

I had imagined that our century ride would engender bonding of the type movies are made about. It wasn’t like that, though.

There were plenty of jokes. There were, indeed, beautiful landscapes. But the most satisfying element of riding that day turned out to be the most mundane: We were just friends on bikes. My birthday century was a joy ride in the most literal sense.

When we turned east in Huron, the first and only headwind of the day greeted us. Fatigue was starting to set in, and we had about 40 miles to go, so it was not welcomed, particularly since we had planned on a homecoming tailwind.

However, as we entered Avon Lake, the road became familiar. We ignored the wind and got on our pedals. We could smell home.

We finished at Katie’s, where Sam and Nate were waiting with a celebratory cheesecake and beer.

At the end of the day, we had spent six and a half hours riding. We were endorphined up and worn down. We were gross with road grime and sweat. Two missed turns included, we rode exactly 108 miles.

Fortieth birthdays can give some people grief, but not me. Mine affirmed that I am doing something right. Friends and bike rides will do that.

Jarrod Zickefoose is a writer and cyclist in Cleveland.