Posts from the Road: The conclusion of A Lake Erie Odyssey. 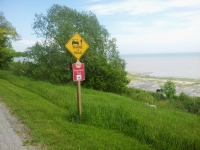 The following is the story of the last six days of my 11 day self-supported bicycle trip around Lake Erie told through my posts to social media during the journey.

Wednesday, May 29
dispatch from Turkey Point, Ontario: Had a great day staying with Jessica and family as she recovered from her crash. I charged the zipline course through the forest canopy at Eco-Point. Nice to have a day off the saddle to prepare for the 100km+ to Long Beach tomorrow...

After unexpectedly losing a day, I surmised my journey would best be served by sticking to my original route to explore lower Ontario, but return by train from Buffalo in time for work Monday morning. My plan was to take the most direct route to the next evening’s destination: Long Beach in Wainfleet, Ontario. After getting into a good groove for the first 40km (25 miles), a sign marking the “Waterfront Trail” coerced me from the main thoroughfare and back to the lakefront. Meandering along the lakeshore, passing through picturesque farmland and stretches lined by cottages was so enjoyable that I gave up on making good time. After eating lunch at another empty provincial park, I continued following the shore with a detour to the tiny hamlet of Port MaitIand, and finally arrived by nightfall at Tim and Jackie’s summer cottage on Long Beach.

dispatch from Wainfleet, Ontario: took the scenic route hugging the coast along the “Waterfront Trail” for 132km starting from Turkey Point. Beautiful lakeshore on the right, classic barns, farmland or beach houses on the left the entire way... great country.

After being treated to warm hospitality and plenty of food, I was ready to embark on the next day’s journey. Before leaving, I discussed with Tim my plans to cut short the return trip by taking the train from Buffalo. Being a Buffalo native, he helped me map out the best route to the train station. As I was preparing to leave, Tim asked if I would like a ride to the next town. I politely declined, as I didn’t want to cheat my bicycling journey. To this he replied, he didn’t see how it mattered, as I was going back home by train anyway. This subtle nudge got me contemplating the possibility of finishing my trip properly by the power of my own legs. Upon reaching Port Colborne, I pondered continuing eastward to begin my return trip by bicycle, but couldn’t bring myself to bypass visiting Niagara Falls. Instead, I pushed north along the Welland Canal.

By this point my bicycle and I had seemingly merged into a singular machine as I churned through the distances. At the mouth of the canal, I stopped for lunch on a beach on Lake Ontario; while my hopes of swimming were dashed by large signs declaring the water unfit. However, reaching another Great Lake felt like a milestone. With no time to lose, I jumped back aboard my steed and headed east towards Niagara-on-the-Lake. As I was entering wine country, that night’s host called to inform me that he now had plans to leave for the weekend. After another declined offer of a ride, I promised to meet him at his house in Niagara Falls before he left around 5pm. I was now a man on a mission, with the next 40km in the hot afternoon sun more a race against time rather than a leisurely tour. I rode through the vineyard, around the old British forts, and labored up the escarpment with just enough time to navigate the streets of Niagara Falls and reach his home. After a brief chat before his ride arrived, I was offered the backyard to pitch my tent and the garage to store my bike as well as some much appreciated beers from the fridge. After setting up my tent, I ventured into town in search of a meal.

dispatch from Niagara Falls, Ontario: rode from Long Beach east through Port Colborne then north along the Welland Canal for lunch along Lake Ontario at Port Weller (no swimming allowed!). Then I pushed onward through Niagara-on-the-Lake and south along the Niagara Parkway. 111km (69mi) total followed by the most satisfying pizza and beers ever. Cheers!

That night, possibly emboldened by a stomach full of pizza and several beers, I resolved to continue my journey and pedal home to Cleveland. I arranged for another host for the next evening, informed my boss about my delay, and slept soundly given my new plans.

In the morning I returned to the Niagara Parkway and upon reaching the falls slowly made my way through throngs of tourists. Being my first viewing from the Canadian side, it struck me how breathtaking the Horseshoe Falls were from this vantage point. I took plenty of pictures, then returned to the bike path following the Niagara River south towards Fort Erie. After crossing the border on the Peace Bridge, I enjoyed my first lunch in Buffalo back in the good ole USA. With my earbuds in and the music cranked up, I pedaled steadily through New York on a bike path along the south shore. Having entered a pedaling-induced trance, my mind became engrossed in the moment only turning away when interrupted by my insatiable hunger and the need to calculate the distance to my next stop. I was caught in several rainstorms, the deluge so strong it drowned my supposedly waterproof headlamp. The greater the struggle, the clearer my mind became focused on my goal. After a tough 75 mile day, I arrived in Dunkirk at the home of my next hosts, Tim and KimMarie. I was more than grateful for shelter from the storms, a warm shower, bed and some delicious, wholesome meals. The generosity of the people I met along my journey never ceased to amaze.

Saturday, June 1
dispatch from Dunkirk, NY: a wet day after leaving Buffalo and hugged the shore on a bike route mostly along SR-5. A storm came up so fast off Lake Erie while I was stopped for my second lunch at Evangola State Park that I didn't have time to grab a jacket let alone put my things away. Drenched in brief warm showers four times before arriving in Dunkirk for a man-made warm shower and place to stay courtesy of KimMarie and Tim.

No longer possessing the mental energy, motivation, or time to journal or email, details about the ride became scanty as I pushed to reach Ohio. My first clear memory is stopping to briefly refuel at a small New York town park, which had a vividly painted replica of an old British sailing ship displayed on the shore. Fighting a near constant headwind, I pushed onward along Lake Road crossing into Pennsylvania eventually detouring off the route to eat another meal on the sandy shoreline of Presque Isle Park in Erie, PA.

After lunch my route took me away from the shoreline and into the flat farmland of western Pennsylvania. As evening approached I finally crossed into Ohio. Entering the state a slow leak from my rear tire began slowing my progress. Resigning myself to calling it a day, I stopped to change the flat 25 miles from Geneva and ended up resting my weary body next to the interstate at the Evergreen Campground.

Sunday, June 2
dispatch from Conneaut, OH: Enjoyed my second lunch of the day with the sands of Presque Isle between my toes. A flat tire just past the Ohio border at dusk prevented me from accomplishing my ambitious goal of reaching Geneva. I’m calling it a night at a campground next to I-90. 89 miles (143km) into Lake Erie headwinds isn't a bad day…

I awakened rejuvenated from a good night’s rest and got on the open road with hopes of reaching Cleveland in time to reunite with my dog, Bella, who was staying at doggy camp. I churned through mindless miles and came upon the old harbor of Ashtabula, taking a few pictures of the once bustling port and rail yard until my phone battery went dead. I pushed on through Geneva and eventually made it to Painesville Square for a rest stop and lunch. Undeterred from fatigue, I decided to take an alternate route through the hills along Johnnycake Ridge Road, finally linking up with familiar terrain along the Chagrin River. Despite my heavy load and weary body, adrenaline pushed me over the steepest stretch of Old Mill Road out of Gates Mills and back home in the Heights. I was in time to find a ride and pick up Bella before doggy camp closed for the night… the appropriate completion to a wonderful adventure.

Monday, June 3
Back home! The push up Old Mill Road out of Gates Mills had never hurt so good...the 22T granny gear and my perpetual (slow)motion machine got the job done. A strong 86.5mi (139km) finish for the last day from Conneaut, OH. Awesome trip. Bike adventurer for life...

More than 700 miles (1125km) later, I can definitely say that my journey around Lake Erie was the trip of a lifetime. Perhaps not the most relaxing or hedonistic vacation, but certainly the most gratifying. Besides slowing the pace to provide a better sense for the environment and people, traveling by bicycle provided a great feeling of accomplishment and satisfaction with each push of the pedals. It was the culmination of my bicycling lifestyle. Hopefully, there are many more adventures by bike ahead...Keep riding and smiling…