Guerillas In Our Midst 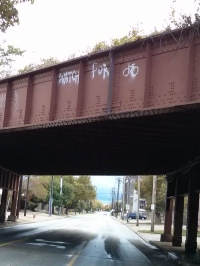 Last month, we showed you DIY or guerilla bike lanes on a short stretch of Detroit Avenue in Ohio City--white duct tape stripes, and sharrow stenciling, which the city promptly scrubbed from the pavement.

The City of Cleveland has yet to make good on its promise of Detroit Avenue bike lanes.

In the mean time, and in another neighborhood, slightly more traditional graffiti vandals with an equally positive message have posted the reminder to "watch for bikes" on at least one railroad overpass.

The Great Lakes Courier does not condone vandalism in any form.