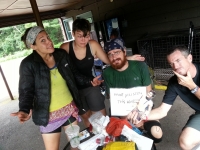 Have you seen this hiker? Nope was usually the answer by other thru-hikers.
View Image Gallery

In the rain. We packed up camp and headed to breakfast at a quaint little coffee shop before ascending straight up a mountain for 4 continuous miles. Or was it 5? It all blends together.

As I was checking the ‘Book, I made a nice little discovery that brightened my overcast morning. Seems the Frienemies were quoted $20 at the bunk house when they arrived. “I thought it was $10” says Frienemy #3. “It is” says Dennis, “But for PGH, its $20. 10 for the bunk. The other 10 goes to Bike Cleveland.” BOOM.

Just to help you put this into perspective, this is the elevation profile of the next 105 miles we were riding with fully loaded bikes of pannier gear goodness and IPAs: http://goo.gl/FPT8gn.

And THIS is a detailed look at our first 35 miles… (pay special attention to those first 5 miles, will ya?): http://goo.gl/1ItKV6

CLIMBING LOVE. And actually, it was. Although I was very jealous of the roadies I passed with their fast, light, gearless rigs (and vow to go back on the road bike to knock that century out in a day), the ride was phenomenal. Skyline’s grade is a nice one, and the entire route is pretty freakin epic. There are overlooks everywhere. The Appalachian Trail crosses it 28 times (someone had to see Argo, right?), and we made the discovery that you do not need to schlep 3 days of food with you. Or beer for that matter. Did you know at all of the waysides you can get bottles and cans of killer VA craft IPAs for under a buck fifty each? Blackberry milkshakes are a staple, and even the food stuffs were affordable. We mostly made use of the IPA supply however ;)

Along our way, we ran into many hikers (not literally like Barbie however) and asked them if they had seen Argo…and we had many a “Where’s Argo” photo sessions with hikers, rangers, trail markers and random wildlife. No one had seen her. And then? It started to rain. It was a nice rain though. So no complaints. But when we decided to stop for a photo op at the highest point on the drive and discovered that Skyland resort had the original historic cottages for rent and a tap room, we decided to forego the A-T shelter we had planned on for a chance to let gear hang and dry under a roof. And, well, enjoy some local IPA goodness while listening to live music.

You know who was not listening to live music with us? Argo. Still no sight of her.

THURSDAY! HAPPY JULY 4TH! So, along our route, we had been communicating with Rock on the whereabouts of Argo. Although it would be most epic to just run into her as she was crossing the drive on the A-T, it was more realistic to meet up with them in Waynesboro, where we were ending up on Friday, and where Rock’s Slack-Packing Service was headquartered for the weekend. She was hiking with some pals but decided to break away when they took a zero day, and had made a significant stride since then, so she was ahead on the trail. Because of this, we informed the duo that we were heading to the Pinefield A-T hut for the night, and hey, since you are now in the area, let’s meet there for the great Snickers Exchange around dinner time, ya? Rock was doing his own thing and occasionally meeting up with Argo for a slack or a snack while she ultra-hiked a 40 miler that day, so dinner was a good bet for all of us later.

So, that was that. And McParty & I got on with our day.

I decided to have a leisurely breakfast at the resort, while McParty headed out ahead of me.  We met up at a wayside later, shared lunch & brew and then continued on. We each did our own thing really, enjoying overlooks, the ride & the scenery. And of course at one point, it began to rain again. Pretty fast and pretty hard…and I found Marty at the bottom of a soon to be big climb enjoying a schlepped beer before the ascent. I continued up ahead to keep the momentum and take in the mid-day scenery. The rain let up as quickly as it came, and I peered into each overlook as I went by, thinking..wouldn’t it be cool if…

Then? There it was. A mini-cooper. With a bike rack. It was how it was supposed to be… (sorta)
I pedaled into the overlook and saw Rock & Argo enjoying the view before she departed on her next leg of the days hike.

I called out “ARGO” as I made my way in what seemed like slow motion (or was it the huge hill?) into the overlook lot…Argo went from hugging Rock to running full on to hug me! And Rock did the same! I *almost* did not unclip fast enough but I was spared the falling over by two embraces that felt like all the stars were aligned. It worked! I found Argo! And not in Waynesboro. And not at a shelter for a planned dinner…but on the side of the road, near where the A-T crosses Skyline drive. We Found Each Other!

We sat on the stone wall. Catching up. Staring at the IPAs Rock had ready for the moment and wondered when he would arrive.

And after 10 minutes…he did. You should have seen the grin on his face when the three of us, dressed in identical Where’s Argo shirts stood up and offered him a beer. BOOM. Here we were! We had found Argo.

And of course we made sure to give her that Snickers, even though she had candy, cookies, donuts, and sandwiches in the car.

The other best part, besides the whole meeting her on the side of the road thing, was that Marty had never met Argo (or Rock) in his life. He was just along for the ride, so to say. Ha!

After several more hugs, photos and stories, we decided it was time to let the girl finish her 40 (miles) and meet up at the shelter for dinner after our ride and her hike ended for the day. So…onward!

Here’s a fun lil twist: Shelli turns the wrong way on the A-T and ends up hiking a mile out of her way. And imagine the surprise of Thru-Hiker DQ when he stumbles upon a chic pushing a bike on the trail Shhh…don’t tell. It’s not allowed, but the heck if I was gonna carry it down the trail! We stopped and chatted. I gave him a beer. And we both headed back to the shelter where we found Argo, Rock, Marty and…hey! Another Bike-Packer. On the A-T…go figure!

Argo & Rock parted ways with us for the evening and plans were made to meet up in Waynesboro after our bike and her hike on Friday…and Marty & I settled into our camp-making routine with our new pals.
A few minutes later, a gaggle of scouts invaded, but seeing our gear, decided it was best to head to the tent area beyond and up the hill.

A few minutes after that, two section hikers (and pals with DQ for the last couple of weeks) appeared. We all had dinner, decorated the shelter with Argo stuffs, and then, to honor Independence Day, celebrated the hiker shelter way: lighting sparklers on fire, waving mini flags, singing the National Anthem at 9pm (we even earned a round of applause from the scouts!) and passing out at a rather late Hiker-Midnight of 9:30.

She hiked. We biked. We also found our very first expensive wayside. And although I enjoyed the infamous Blackberry shake, Marty & I were both shocked by the prices of our beloved mountain IPA. So we bought a box of wine to schlep…and then? The girl in the kitchen says: “if you ride a mile up the hill, the camp wayside has much cheaper beer and a full shop!”

Well…ok then. We headed up. But? Not before we gifted the box wine to some thru-hikers. :) Trail magic I tell ya.

What was not magical? Was the climb up the “hill” to the camp. Yah, uh. I didn’t need beer that bad. But Marty was determined. So…there we go. And there we went. And there we found affordable liquid carb replenishment. I have to say, the ride back down the “hill” was EPIC.

Beauty was everywhere! The trees. The overlooks. The mountains. The road…everywhere! I HIGHLY recommend cycling Skyline Drive…and before you know it? You will complete it.

Just like we did. As we approached the ranger station, it was bitter sweet. We finished one of the most epic routes in the US. We enjoyed the beauty of this journey from the bustle of Pittsburgh, PA, through the quaint cuteness of the GAP, through the bottom pounding C&O, through the hell of rte. 522, and through the epicness of Skyline Drive…and the awesomeness of delivering a Snickers bar to a hungry hiker! And then, we found ourselves going through the gates and coming to the end of this journey.

BUT. It was not the end. We had a day to go! High fives followed hugs, and pictures were taken…but we still had a full 24 hours of adventure ahead! We rolled on down to Waynesboro, visited an outfitter (I bought a dress, yay!) and headed to the YMCA to get a shower and set up our tents for a night in hiker-bunk yards and visiting breweries.

Funny little thing here…so when asked about where to put our bikes while we showered, the YMCA said: “We never see bikepackers…just backpackers. Hmm. Not sure.” I guess people just drive to the YMCA to ride stationary bikes? I dunno. They lacked racks. yo.

So anyhow, we shower, we set up camp…and we head off to the hotel to meet Captain Rock & Argo. Along the way, I noticed 2 bikepackers pluggin’ along going north. Coolio! There are more of us in Waynesboro! And Waynesboro was also close to some great local breweries…So - We smooshed into the Mini, and headed off to enjoy one.

We were dropped off at our site by Captain and noticed something funny: The bikepackers we saw were all set up here at the hiker yard too. And not a hiker in site. Guess the YMCA can’t say they never see us now, can they? Anyhow. Sleep.

Tomorrow, instead of a 2 wheeled ride, we had a 4 hour 4 wheeled journey.

Saturday – Which way to the Appalachian Trail? Martimer & I needed our required mile to log for the #RustCrown, so we rode to breakfast at a great little diner. Then rode back. Packed up. Got picked up. And were whisked back up Skyline Drive. We had to drop our hiker off, ya know?

And we did. And at the camp area where the trailhead was located, all of us could not find the Appalachian Trail (why are white blazes so difficult to find in a parking lot?!) But we assumed she was walking towards it as we left. We think. Well. Maybe. Anyhow…there were reports later that she was on the trail. And even headed in the right direction. So all was good.

Our adventure had come to an end. And our host in Pittsburgh knew we were sad it was over. So? He greeted us with some of the best homemade pizza and cold beers a crew could ask for. Very cool.

The perfect way to round out the perfect 420 mile food delivery expedition.

Need a Snickers delivered to your doorstep? Let Marty & I know.
#ArgoVelo