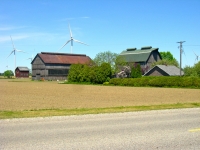 Windmills surrounding one of the many picturesque farms near the lake.
View Image Gallery

Setting off from Wheatley Provincial Park following the previous night’s exorbitantly priced and raccoon disturbed sleep, I decided to alter my plans and push 20km past another provincial park to reach the Clearville Park campground. Along the way I was tempted to detour from busy Talbot Street to follow a sign for the less traveled “Waterfront Trail” that seemed to follow closer along the shoreline. But, driven by the promise of free internet access at the public library I decided to stay on the main route toward the town of Blenheim. Upon arriving there I was too famished to think, so I stopped at the city park and had a satisfying picnic of my typical lunch fare: peanut butter and jelly on mini flat breads, a pepperoni stick with string cheese, Muscle Milk (contains no milk!), brownie, granola bars, squeeze applesauce, and plenty of water. After finding the library, I was disappointed to find it closed. I had resigned myself to a less desirable route along a busy road for miles for nearly nothing. Slightly dejected, I found the local pool to use their waste elimination facilities and bought some items at the pharmacy chain before heading out again: SPF 30 chapstick, battery for my cycle computer (LOW), tylenol for my aching body, baby wipes to manage my persistent griminess, and a can of Pringles as a reward for my efforts.

Re-energized from lunch, I pressed onward on the now-named Talbot Trail (though still a two-lane highway) east through the countryside full of farms and more modern windmills than you can imagine. The substantial investment in progressive energy infrastructure was impressive. Many farms had large solar array configurations in addition to the wind turbines, even in isolated rural areas. And it is isolated... some of the towns on my map hardly exist, consisting of nothing more than a couple of houses.

Where there are windmills there is WIND and that made for some slow going. When the wind picked up I was only able to go 8-9 miles per hour on flat ground. I was pleased to have adopted kilometers, as the equivalent 12-14 km/hr reading on my cyclometer wasn’t nearly as deflating to my spirits. However, the wind made accomplishing my planned 80 kilometers that day harder than I had anticipated.

I arrived in Clearville around 5:30pm, and found that although there was a full campground of RVs, the season for tent camping didn't begin until June 1st. As there was no one at the manager’s office and another campsite didn't exist for another 15 kilometers, I decided to pitch my tent in a secluded spot and hope for the best. While looking for a fresh water spigot, I started a conversation with a retired insurance salesman, who had trailered an RV from Windsor and apparently passed me along the way. He talked about his ancestry from the former ruling class called Ruthinians in present day area of Poland/Ukraine/western Russia, the difference between a US gallon and an imperial gallon, and general pleasant conversation contrasting Canada with “the states.” Later that evening, a maintenance man came around and after discussing my situation allowed me to stay for free as long as I was quiet and didn't make a fire or cut down any trees. I had a wonderful night's rest despite the frost, which I pleasantly slept through due to wearing several thin layers. After a short exploratory hike of the surroundings after breakfast, I packed up and got back on the road around 10am.

With only 50 km to travel to reach my next night’s destination in Port Stanley, I went off my scripted route. I stayed on the dirt roads closest to the lakeshore, and experienced some exhilarating descents down the creek gulleys followed by steep ascents up the other side. At some points I was bombing down hills at over 50 kilometers per hour (30+mph) on gravel with my loaded steed... definitely not the time for a crash. Along one of the flatter stretches I came upon a couple of horses grazing in a pasture close to the road and stopped to capture the picturesque setting. Taking out my trail provisions of prunes and almonds, I held out a prune. One of the horses approached, while the other hung back, more skittish and skeptical. The first horse tried the prune, but didn't seem to appreciate it as it fell to the ground after a few nibbles. The almonds, however, were a hit and soon the other horse cautiously joined to receive some almonds and ear scratching. After retrieving more almonds from my gear, the skittish horse suddenly reared back. Confused as to what had spooked it, I noticed an electric wire running along the bottom of the fence. The culprit was found... our bond was broken, and before all my almonds were gone I returned to my metal steed to continue my journey.

Along the back roads I came upon John E. Pearce Park, where I had a pleasant lunch on a cliff overlooking the lake. Eventually I rejoined the main route into the quaint town of Port Stanley. I immediately found the library, finally gaining internet access after a three day absence. I spent the next two hours typing emails, catching up on my digital life, and chatting with the librarians. I was able to contact my prearranged host Eric who informed me dinner was awaiting my arrival. Eager for a warm meal and the comforts of a home, I pushed up the hill above the narrow river valley to find Eric’s house. He intercepted me on his triathlon bike, and we rode together to his cozy home perched above town. I was appreciative of the good food, warm shower, relaxed atmosphere and camaraderie of a fellow cyclist. Eric is also opening his own recreational outfitting business in Port Stanley, so if you pass through town make sure to stop at Sport in Port for all your gear needs.

The next morning I returned to town to take photos of the sights, snapping pictures of the vintage Port Stanley Terminal Rail running along Kettle Creek and the classic buildings lining the port. With a long ride ahead to Turkey Point to meet up with Jessica, another cyclist, I pushed back on the road. With rain in the forecast, my ride got wet quickly with frequent short downpours followed by longer periods of cloudy grey skies. Hugging the shoreline, I passed through more farmlands with wind turbines interrupted by a couple of port towns, Bruce and Burwell. Caught in a torrential downpour, I stopped outside the maritime museum in Port Burwell to refuel with lunch, amused by my soggy circumstances.

Revived and warm despite my waterlogged state, I pushed eastward along the coast toward Turkey Point. After logging around 65km on the day, the views transitioned to marshland along the coast, a welcome change. During one of my breaks from the saddle, I noticed that Jessica had texted me that she was in Port Dover, 20km east of Turkey Point. I had the option of stopping at her house with her parents or meeting her in Port Dover. Still enjoying the ride and feeling ambitious, I decided to continue on and meet her wherever our paths crossed along the route. Caught in another downpour and slowed by a leaking tube, Jessica intercepted me just after I’d filled my tire. We headed off in the deluge, and soon found ourselves riding too fast down the steep decline into Fishers Glen. After rounding the sharp turn at the bottom, I looked uneasily over my shoulder catching a glimpse of Jessica hydroplaning across the road and toppling over the guardrail. I rushed over to check on her condition, and while she was visibly shaken from the impact, she remained remarkably calm and composed. Not wanting to move, Jessica requested an ambulance. In my flustered state I attempted to relay her parents’ phone number to the homeowner who came out to check the scene unfolding in front of her property. Jessica’s parents arrived followed by the ambulance. We stayed at the hospital until she was released around 3am after X-rays and CT scans eliminated the possibility of anything more serious than some deep bruising and a slight concussion. Relieved by the favorable diagnosis, everyone retreated to bed for some needed sleep.

In the morning I decided to accept Jessica’s parents’ invitation to stay over in Turkey Point. I enjoyed a wonderful day of rest, relaxation and excitement, touring beautiful Norfolk County with Jess’ father, and zip-lining through the forest canopy overlooking the expansive marshland below at Long Point Eco-Adventures. I learned about Jess’ then upcoming tour across Ontario to promote the mental health benefits of physical exercise. She recently completed her inspiring Strong Free & Happy Across Canada ride, which you can catch up with on the website strongfreehappy.ca.

Refreshed by a day off the saddle, I said my goodbyes to their wonderful family and pushed off wearing one of Jess’ wristbands to spread the cause. With my lost travel day I was facing some decisions as to how I was to make it back to work on Monday. From my next stop in Long Beach, I had planned to bike north along the length of the Welland Canal to Lake Ontario and down around Niagara-on-the-Lake before spending a day in Niagara Falls and then returning to the states through Buffalo. But I didn’t think it was possible to make the more than 400 miles in only four days. The rest of the story will have to wait for next month’s issue. Until then, continue to ride and smile…