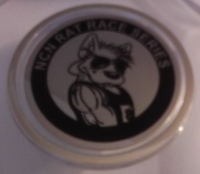 A set of 10 local races called the Rat Race Series.

Cheese.  A Super Bowl’s halftime show.  Bikes.  These are some of the best things in the middle of some of your favorite things: a popular grilled sandwich, the biggest game in football, and a triathlon.

NCN Racing has been organizing racing events since 1987.  Our beloved bike is just part of their many triathlons and duathlons.

Speaking personally with NCN’s race director, Rick Cadwell, this writer asked him a few questions about the cycling portion of his races.

What is unique about NCN races is that bike racers have a timing chip similar to a major running race.  Chips even record transition times between swimming and running.  Results are posted pretty swiftly online.  Their race venues of Bay Village and Avon provide a beautiful view of Lake Erie.  Plus, their routes are flat, and fast.

Some of the bikes that appear in the races, according to Cadwell, are mostly street worthy.  Triathlon bikes built for the fastest speed and times are present, too.  These high priced bikes have carbon fiber performance wheels, and aero steering bars to maximize…well…aerodynamics.  Not many mountain bikes show up for their road races.

Cadwell also says the best part about NCN’s bike races are the safety, fast roads, the challenge and fun!  He credits well marked courses, enlisted help, and the cooperation from the police and sheriffs for organizing great events.

Three bike races are available for the remaining race season.  They are the Towpath Trail Y Duathlon/Biathlon (July 28), the Findley Lake Triathlon/Duathlon (August 4), and the Ledges to Lake Adventure Race (September 21).  These races range from 9 to 14 miles for bike courses, and are sure to be exciting and scenic.  Nothing beats the sound of a rider with Zipp wheels race by you at a constant pace of 25 miles per hour.  Visit their website at www.ncnracing.com.

As biking and awareness grow around Northeast Ohio, so does triathlon racing.  Think about it…most people can ride a bike.  As always, enjoy the ride!