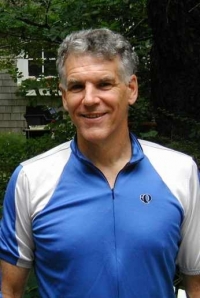 Ride for Miles is a nonprofit organization established by family, friends, and colleagues of Dr. Miles Coburn to educate people about the environment and bicycle safety.  The ride begins and ends at John Carroll University, departing at 10AM on Sunday, September 15, 2013. Participating cyclists will go on a non-competitive, 15-mile bike ride through the Eastern Suburbs of Cleveland.

The funds from this annual noncompetitive bicycle ride go towards funding the Miles Coburn endowed chair at John Carroll.  This project continues Miles' work of educating students and the community about the urgency of environmental activism.

Miles Coburn (1949-2008) was a biology professor at John Carroll University, working just a few hundred yards from the home where he grew up as the second-oldest of seven siblings and a few blocks from his home with his wife and two children.

Miles was an expert bicyclist, often cycling 300 miles a week on a bike he built from scratch. On Sundays, he joined an ever-changing group of bicyclists for a two- or three-hour ride. After his death in a bicycle accident in August, 2008, his family, friends, and colleagues spontaneously organized a bicycle ride where 600 riders showed up by word of mouth. Ride for Miles, Inc. was subsequently founded to educate people about bicycle safety and the environment.

Registration and more information about the ride can be found at www.rideformiles.org

I am a marketing consultant for the Ride For Miles Charity bike ride!