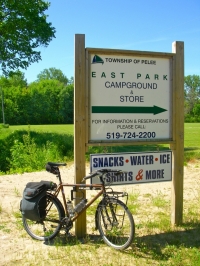 In our previous issue, Michael Mullins described the first day of his ride around Lake Erie--from Cleveland to Sandusky, where he took the ferry to Peelee Island. The ferry ride enabled him to make the trip with just a one-week absence from work, and also to avoid riding through the urban sprawl that is Detroit. We rejoin him in the morning on Peelee Island--ed.

After spending the night at the Pelee Township campground, I awoke refreshed and ready to explore the island.  I quickly packed up and inconspicuously stashed all of my gear except for a single bag in the shrubs and headed to the beach just across the street.  The entire pristine public beach was empty, and I took advantage by spending the next hour basking in the sunrays while lying in the soft sand.   While rinsing off in the refreshing, clear lake water I noted that this seemed like an entirely different lake than the one I left behind in Ohio, with a laidback and peaceful atmosphere to match.   I returned to my bike eager to see what else the island had to offer, and pedaled north along the eastern most side until reaching the Lighthouse Point Provincial Nature Preserve. The walking path deposited me onto another sandy beach with a view of the lighthouse in the distance.  Despite being built in 1833, the old limestone lighthouse was in great shape thanks to government restoration around fifteen years ago.  The iconic lighthouse, along with the picturesque setting and original wooden breakwaters captivated my camera’s viewfinder for the better part of an hour before I broke for lunch perched on rocks overlooking the water.

Following lunch, I went in search of more adventure by wandering the circuitous, and possibly illicit trails to hopefully find my way back to the trailhead by a new route.  The trail I settled on became harder and harder to make out until I was bushwhacking through reeds in ankle deep water.  After retracing my steps and making it back to my bike at the trailhead, I headed west without a destination in mind.  My only goal was to see as much of the island as possible, but to return to my campsite in time to retrieve my things and make the ferry to mainland Ontario by 4pm.

Around noon and with plenty of time left to sightsee, a sign for a nature trail through a field caught my eyes.  I meandered down the double-track, stopping to read signs highlighting the nature and history of Pelee Island while taking in the natural beauty.  I learned that Pelee Island was actually several low-lying islands that have since been patched together, and flooding has been largely mitigated by a series of canals that encircle the island’s interior like a moat.

Following the nature and history lessons, I got back on the main drag along the north shore and stopped to inspect a large map depicting the island’s attractions.  A site called “Hulda’s Rock” seemed to hold promise, so I headed off for the northwestern tip in hopes of discovering the attraction.  The road narrowed to a trail, where I abandoned my bike and came upon what appeared to be an abandoned limestone quarry that had filled with water.   While exploring the quarry and searching the shoreline for what Hulda’s Rock may be, it dawned on me that without a watch I might have lost track of time.  I hurried back to check my cycling computer to discover that it was 2:40pm, with my stashed gear on the opposite side of the island and ferry boarding starting back on the western side in less than an hour. Unfortunately, I would have to discover Hulda’s Rock and explore the rest of the island on another adventure.

While sprinting to the ferry terminal to buy my ticket, I couldn’t help but stop and take notice of the interesting rock arrangements that adorned a section of the shoreline.  A sign declared the largest monument “Stoneman”, which resembled an enormous trailside marker, or cairn. Surrounding the central figure people had erected their own miniature stonemen along the rocks abutting the lakeshore.  This created a scene that seemed to convey a message of unity or togetherness amongst the island’s residents.

Back on the bike, by 3:10pm I had bought my ticket and had only 50minutes to ride the 7km along gravel roads to the campsite and return back to the ferry. While scurrying to gather my gear as fast as possible, I was able to load everything and head back again for the ferry at 3:34pm. At this point I thought I had it made, and relaxed my pace a bit, but not long after realized that headwinds had slowed me to a crawl and by 3:48pm I was only approximately halfway there.  I proceeded to launch into a full sprint, shifting into the highest gear while stomping on the pedals and throwing the nearly 100lb loaded bike back and forth on the dirt roads in a desperate attempt to avoid another night on the island. By the time I reached the paved road leading to the terminal I had just minutes to spare, but luckily the ship was still in port.  I raced through the gates and onto the loading deck before it started to close.  Completely out of breath, I announced to the ticket taker that my ferry victory felt as satisfying as I imagined winning a stage in the Tour de France…. phew!

The ferry ride was nondescript, except that the only option for potable water was to fill my bottles full of ice and then use the hot water option on the coffee machine... strange. Upon arrival in the port town of Leamington around 5:30pm I decided that instead of staying with a host or camping at the national park just south of town, I wanted to ride for a while and camp at a provincial park a little more than 15km (10mi) along my route in Wheatley. This unfortunately was a financial and sleep quality mistake. Upon pulling into the park at dusk I was informed that it cost $40 per night just for a campsite! The sleep quality issue was due to the persistent annoyance of the local raccoon horde. They launched a full onslaught through the night to assess my provisions (or just to harass me?), despite my prior attempts to eliminate all attractions by throwing out my garbage and sealing my food in bags next to my tent. I tried shining my lights at them, yelling epithets, throwing things, and at one point instinctively foot slapping one that awakened me by brushing up against my feet through the tent.

After finally getting a few hours of decent sleep in the morning after the raccoons retreated, I had a wonderful time on the beach taking pictures, writing, and just appreciating the scenery before packing up and heading back on the road.  At that point it struck me that there is something completely satisfying about this type of travel.  I felt a sense of accomplishment in every aspect of the journey, as I remained self-sufficient and open to whatever detours and unexpected adventures the path ahead may bring.  My journey felt like it had just begun, and I couldn’t wait for what the upcoming days would bring. Adventuring by bike had become a pursuit I will enjoy for a lifetime… I just hope more will discover the joys for themselves.