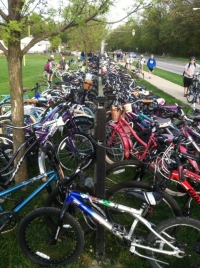 On National Bike to School Day on May 8, 634 Bay Middle School students biked (77% of the school).
View Image Gallery

The biggest bike-to-school program in the nation is right here in Northeast Ohio, and it grew even bigger this year.

From May 6 through May 24, over 4,000 students at five schools in Bay Village, Rocky River and Medina took Century Cycles' Bike to School Challenge (www.centurycycles.com/for/BTS), and their biking set all new records for the award-winning program. Using daily bike counts and student surveys to gauge participation, organizers report that the students:

Almost every school in the award-winning program experienced a record year this year, but it was a standout year at Bay Middle School, which set all-new high marks in every category tracked:

“Bike to School Challenge is a model of what we should be doing across the country,” said Chris Speyer, Chief Operating Officer of Accell North America, the parent company of Raleigh Bicycles (www.raleighamerica.com) and a main Bike to School sponsor. “At Raleigh Bicycles, we believe in investing in schools and communities that show a commitment to youth bicycling.”

Toward that end, Raleigh Bicycles and Century Cycles awarded 16 Raleigh bicycles to students as prizes, and Raleigh gave cash awards of $3,000 to the schools and $4,000 to the cities for bicycling improvements.

“I have never seen a bike-to-school program that generates the level of participation and excitement that this one does. It is a credit to the tremendous amount of commitment and work by the schools, its local bike shop Century Cycles and the entire community to engage and inspire the students. Raleigh Bicycles is extraordinarily proud to be part of Bike to School Challenge,” said Speyer.

Founded in 2008, Century Cycles’ Bike to School Challenge communicates to students the impact that bicycling instead of driving can have on their health and the environment, and they are incentivized with daily and grand prizes to bicycle as much as possible to school for three weeks. Students carry cards that are stamped for each bike-ride to school and can be entered into the grand prize drawing that concludes the challenge.

“We organize it for three weeks because we want to establish bicycling as a habit,” said Scott Cowan, owner of Century Cycles bicycle stores in Rocky River, Medina and Peninsula, Ohio, the challenge’s organizer and main sponsor. “We are gratified to see far more bicycling year-round in these communities because of Bike to School Challenge.”

Bicycling was a daily habit for over 10% of the participants; organizers report that 447 students biked every single day of the challenge.

"As biking in Greater Cleveland continues to grow, it is exciting to see 447 students bike to school all 15 days of the Bike to School Challenge,” said Jacob VanSickle, executive director of Bike Cleveland (www.bikecleveland.org), a local bicycling advocacy organization and challenge sponsor. “Bike Cleveland is proud to recognize the commitment of these students by giving them student memberships to Bike Cleveland and adding them to our powerful movement of advocating for a more bicycle friendly region."

His pride was echoed by city leaders.

“The entire community is really proud of you,” Mayor Deborah Sutherland told Bay Village students at their school-wide celebrations. “Your efforts are making Bay a hub for the bicycling community.”

Their efforts are also attracting national and international attention. On the same day other national media were flocking to Cleveland for a high-profile kidnapping case, Bicycling magazine (www.bicycling.com) sent executive editor David Howard to Northeast Ohio to check out Bike to School Challenge. He wrote an online feature story titled, “The Land Where Kids Ride: In suburban Cleveland, an astonishing number of children ride to school. Here’s what we can learn from them” (http://bit.ly/ZUztVW). The Atlantic Cities transportation blog dubbed Bay Village “a bike-to-school mecca” in an online story (http://bit.ly/12m9qFD), which was read by the principal of a school in Australia that contacted challenge organizers for ideas how to replicate the program there.

Medina middle school students logged 14,752 miles on their bikes during the three-week program on May 6-24, up 12% over last year’s inaugural challenge and a record-setting year for both schools. Claggett Middle School averaged 79 bicyclists per day during the challenge (8% of the school’s enrollment), up 22% over last year’s challenge. They also set a new high-ride day on May 8 and again on May 17, when 94 students biked to school. Root Middle School averaged 136 bicyclists per day (16% of the school), up 6% over last year and a new record for the school.

For more information about Bike to School Challenge, go to www.centurycycles.com/to/BTS or follow the program at www.facebook.com/BikeToSchoolChallenge or on Twitter (@BTSChallenge).

Tracey Bradnan does marketing and events for Century Cycles bicycle stores when she's not riding her cruiser bicycle around town.