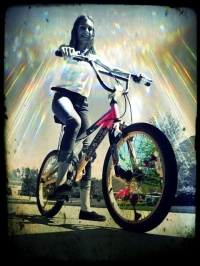 "The Great Lakes Courier is pleased to help amplify the voice of the cycling community in Northeast Ohio, and never more so than when we have the opportunity to recognize the accomplishment and creativity of kids who bike to school," said Michael Gill, editor of Great Lakes Courier. Gill was joined by Sean Burkey from Raleigh Bicycles as the contest's two judges.

Besides being published in this issue of Great Lakes Courier, each winner received a new Raleigh bicycle from Century Cycles in a special presentation at the closing ceremonies of Bike to School Challenge at their school.

Taking us to places

Turtle and Fox by Sydney Williams

Fox and Turtle were small little creatures, not unnaturally though. These animals went to Rocky River Middle School. They were pretty much inseparable during school hours until “Bike to School” started. The first day, Turtle biked with other people and Fox wondered why she did that. That same day Fox sat somewhere else at lunch time. They slowly grew apart from each other as “Bike to School” went on. Turtle and Fox never talked to each other anymore and they had no idea why, but they were mad at each other. Suddenly on the last day of “Bike to School”, they both showed up at their old meeting place, they didn’t say anything to each other they just got on their bikes and biked together. Throughout the day, they slowly began talking to one another again. Turtle and Fox both realized how much they missed the other and how lost they felt without the other. By the end of the day, they couldn’t stop talking, they had so much to tell each other. But in the end, they were both thinking that what really brought them back together was Bike to School and the people who inspired them to ride.

Something So Simple by Chloe Roberts

People hardly ever use the freedom that they have or the easiness of something so simple, like riding a bike. It seems as though, you can get caught up in this unclear world, with the wind whipping in your face and your hair blowing backwards, life moves around you in blurry pictures and you’re just a lingering ghost watching it all play out. It’s a diverse sort of flying, and an undefined freedom that people just don’t know they have. It’s literally just you and the world. No thoughts of distress or hints of worry can follow as you peddle quickly down the road and that’s what’s so wonderful, to me, about being able to ride to school.

Being a kid, everything seems stressful to us. Does that certain person like me? We hop on our bike. Did I ace the math quiz? We kick the kickstand up. Did I make the basketball team? We adjust the gears. Did I remember my homework? We press our foot down on the peddle. Did I- We begin moving. It’s a special kind of moment where everything is just blissful, where everything doesn’t seem to matter as long as you’re breathing. It’s where the journey is more important than the destination, and even getting to school doesn’t seem like a curse. That’s the thing about being free, life just pauses for a moment and you get mixed up in this realm of color.

Tracey Bradnan does marketing and events for Century Cycles bicycle stores when she is not riding her cruiser bicycle around town.