A Lake Erie Odyssey part I 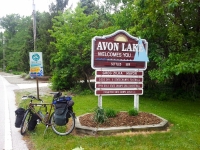 The sign for the "Bicycle Friendly Community" of Avon Lake demarcated the author's departure from Cuyahoga County and the beginning of the feeling of an adventure.
View Image Gallery

After another failed relationship this past year, I realized only two non-inherited relationships during my adult life have grown stronger with time: my nine-year association with my closest companion and sole dependent, Bella, and my life-long connection with the bicycle.  Bella is my dog, and really has no choice but to put up with me.  Just like the bicycle.  This could be interpreted by some as a reflection of some deep personal fault of mine.  However, I’ve come to understand my solo status simply reflects that I’m currently more comfortable as an independent life adventurer than restricted by a significant other.

Coincidentally, my journey of self-discovery swiftly progressed when I sold my car after moving to Cleveland from Colorado three years ago.  My bond with the bicycle has flourished since then, as it has become both my primary form of transportation and recreation. Even Bella has benefited from my undying commitment to the bicycle, as she loves running alongside me during our frequent local biking excursions.  Having comfortably established the tapestry of my life by bike, I feel that both Bella and I are far better off today as a result of my relationship with the bicycle.

While coming out of the winter thaw and swapping my winter tires for the usual slicks on my commuter bike I began to feel an itch for a greater sense of adventure than I had achieved since moving to the Cleveland area.  What could commemorate my time in the Great Lakes region better than a self-supported journey around Lake Erie?   I’ve gone on many backpacking adventures, but this would be my first foray into the realm of bike touring.  So, I gave myself a couple of months to plan and obtain the necessary equipment.  I checked out a couple of bicycle touring books at the library and acquired the Adventure Cycling Association’s Lake Erie Connector and Northern Tier maps, which together designated a bicycle route for most of my planned journey.  When I had saved up the necessary money and time, I purchased the rest of my parts: a front rack, front panniers, a front derailleur and chainrings to push the fully loaded bike over any steep hills, a handlebar-mounted map case, and (shame) a kickstand for keeping the loaded behemoth upright during anticipated frequent stops.  Due to my penchant for exploration off the bike, I chose not to ride clipless so I would have the freedom to comfortably explore new terrain on foot.  Adding camping equipment, clothes, and several days’ camp food, my loaded metal steed weighed in well over 100lbs.  This was going to be a slow, but fortunately, relatively flat journey.

Around 9am on the Friday before Memorial Day weekend, I pushed off from my apartment in Cleveland Heights in hopes of catching the 8:30pm ferry in Sandusky to Pelee Island, Ontario.  I got only two blocks down my usual commute, when I turned back home, as my fingers were already cold from the unseasonably chilly air.  I picked up my wool cap and glove liners, put them on and headed out again.  Not three miles into my ride approaching MLK Jr. Boulevard on Euclid Avenue a sharp “POP-CLANG!” sounded as an “S” hook shot off into the street and passing traffic.  Upon inspection, one of my new front panniers quickly demonstrated the importance of testing out equipment before heading off on a major trip.  The attachment system had rejected the stout rack tubing by wrapping around the front hub instead.  I managed to bend the remaining mangled “D” loop into something resembling a hook shape around the bottom of the front rack, cinched it up as tight as possible and pushed on.

This inauspicious start continued, as the simplest and most familiar stretch of my journey strayed off course. Before entering Playhouse Square at East 18th, Euclid Avenue was completely closed, and the detoured traffic was at a standstill.  I managed to maneuver around the deadlock and eventually met up with a bicycle messenger who informed me the traffic problems were due to the Captain America filming going on downtown.  Back on route after passing Tower City onto the Detroit-Superior Bridge, my journey felt like it officially began when I left the confines of Cuyahoga County and was greeted by a sign for the “Bicycle Friendly Community” of Avon Lake.   The bicycle lanes on US-6 definitely felt friendly. The fact that they continued almost uninterrupted to Huron further substantiated the “bicycle friendly” claim.   Approaching noon I decided to stop for lunch at a small lakeside park in Sheffield Lake.  It was exceptionally windy with temperatures in the low 40s, so I put on my pullover and rain jacket for warmth.  A mustached man with a fully loaded bicycle struggling in the wind to eat sausage and cheese apparently attracts curious eyes, as a guy pulled his car behind my bench and beckoned for me to approach.  After chatting briefly about what I was doing, he introduced himself as a reporter from The Morning Journal newspaper in Lorain, OH.   He explained that he was interested in running a short feature about my fledgling journey and ended up snapping some photos as I pedaled past him down the road.   A few hours of pedaling later I reached Huron and took a second late lunch while enjoying the lighthouse view and feeling the sand between my toes at Nickel Plate Beach Park.

Exhausted and somewhat delirious, I arrived in Sandusky with two hours to spare and set out to repair my panniers with parts from the local hardware store.  Following repairs, I refueled with the largest Subway dinner of my life before boarding the ferry for Canada.  While leaving port in Sandusky, I called my Mother to inform the family that I had made it safely, and I would likely be unreachable for the next several days as I was unwilling to pay the exorbitant roaming charges in Canada. At dusk I bid adieu to “the States” for the next week as we passed the familiar skyline of rollercoasters at Cedar Point amusement park. Back in the passenger cabin, I bought a cinnamon roll and hot chocolate in a futile attempt to quell my insatiable appetite, and after downing both settled into an uncomfortable seated sleeping position on one of the benches.  Locked into a cycle of head nod dozing, the two-hour ferry ride to the island was peacefully uneventful.

The ship arrived on Pelee Island around 10:30pm and after passing the customs officer, situating my riding lights and orienting myself, I pushed off into the dark towards the public campground on the opposite side of the island.  After a leisurely 7km ride (I adopted the metric system at this point in an attempt to fit in with our northerly neighbors), I found an appropriate campsite, unloaded my bike, and made the patch of grass my temporary home for a well-earned night’s rest. Looking back, that first day was by far the most grueling of the trip, as I battled the unseasonably cold temperatures and headwinds off Lake Erie while pushing to complete the 72-mile trek in time to catch the ferry.  In addition, I was dealing with all the small challenges associated with the drastic lifestyle change of pedaling my portable home and provisions around for eight hours a day.  What an exhilarating and satisfying start to my adventure, gaining the confidence that I could overcome the obstacles I might encounter along the journey.  I fell fast asleep while looking forward to the prospects of exploring the island the next day…

The adventure will resume along the Canadian north shore east towards Niagara Falls in next month’s issue. In the meantime I hope you are inspired to more fully enjoy the adventures of your own lives, by whatever means you choose to travel…