Six Days in Solitary, Not Confined 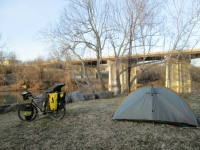 Self-supported touring means packing it all on your bike.
View Image Gallery

Any experienced cyclist is well aware of the therapeutic benefits of a nice, long bike ride. The satisfying burn of lactic acid in your thighs; the beautiful, unexpected sights along the way; and the musical hum of rubber against pavement are just a few of the countless pleasures that are uncovered when you put your butt on a bike. It was these joys and all the others that I hoped to find in setting out on a solo bicycle from Durham, NC to Cleveland, OH this past March.

As a bike shop owner, my passion for bike touring is confined by a cruel irony—during the warmer months when touring is most pleasant (often referred to as “the cycling season”), the shop tends to be very busy, so I simply cannot find the time to ride my bike as much as I’d like to. For the last couple years, however, I’ve found a decent solution to this conundrum.  Renato and I close the bike shop for a week or two in late winter and I go ride somewhere.

The idea for this year’s trip started as a desire to visit my old college friend Rebecca in her new home of Durham, NC. Initially, I thought I’d ride from here to there and then fly back, but eventually decided that it would make a lot more sense to do the reverse. So I shipped my bike, panniers, and camping gear, and hopped on a plane from CLE-RDU. The good folks at Tip Top Cycles in Durham were kind enough to receive my bike and allow me to use their shop space to build and fine tune my rig in advance of my departure. And then, after a lovely, relaxing few days’ visit in the easy-living college town, it was time for me to move north.

Leaving Durham, the weather was about what you’d expect  for early March in the Northern South (is that a thing?); breezy, upper 40s, drizzle. The roads, as soon as I got out of town, became exactly the type that most touring cyclists live for—winding, forested 2-lane numbers with some traffic, but not so much as to cause me any real headaches. The riding went on like that pretty much all day (and for most of the remainder of the trip, in fact); plenty of rolling hills, a handful of visibly poor small rural communities, and generally very pleasant times. My first real challenge came as night began to fall and it came time to find a place to camp. Though I was surrounded by woods, the trees were rivaled in number by signs announcing “NO TRESPASSING,” displayed prominently every 50 feet or so of highway. I was also (I kept reminding myself) deep inside what could accurately be described as “gun country.” Eeep!

So imagine my surprise and delight when I came upon a stately olf country mansion, abandoned and dilapidated as any Rust Belt worker’s cottage. I figured this would be a decent place to hide out for the night—and it would’ve been, were it not for the trio of rabid-looking wild dogs who promptly showed up to ruin my one man party. It was a pretty alarming situation, but I managed to keep them at bay (“Good doggy… gooooooood doggy.”), pack up my camp, and get out of Dodge unscathed. Another few miles down the road I found an old, overgrown dirt track, followed that down a ways, and—far enough off the main road—made camp in the dark (glad I remembered to pack my headlamp!).

So this is just one story (admittedly long, sorry!) among many that I could tell from this week-long journey. However, rather than go on any longer with detailed tales from the road, I feel more inclined to share some reflections on the overall effect that this experience had on me. Both during and after this tour (even up until today) I’ve frequently thought to myself—“Would I,” or, perhaps more appropriately, “Could I recommend to someone else that they undertake a 500+ mile solo self-supported bike tour through NC, VA, MD, WV, and PA in early March?”

The answer to that question can only really be, “It depends.” I felt, during my 6 days of solitary riding, a wider and more extreme range of emotions than I can ever remember experiencing during any other similar period in my life. From absolute euphoria to utter hopelessness in under 24 hours. Is this fun or good? I don’t know; I really can’t decide. But I think yes. On your own, for such long periods in such inspiring or challenging circumstances, you get to think about things with time, and in a depth that can be very difficult to achieve during day-to-day life. Additionally, without anyone else there to help you process or temper your emotions, your responses to certain feelings and situations can be very extreme (this was the case for me, at least). In the end, the trip was a very interesting and challenging time—alone, on the road, in the wooded hills of Appalachia, in a land I knew nothing about. Getting beyond the unexpected difficulties of the road as well as the emotional turmoil that I felt was not easy. In fact, it was one of the hardest things I can remember doing. I can’t wait to do it again next year.­­