Let celebrate bronze, but then get back to work 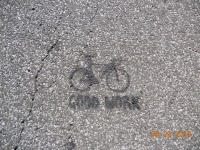 As bicycling continues to grow in popularity across the country, there is a growing competition among city leaders to be known as the best city for bicycling. One benchmark in this competition is to be designated a Bicycle Friendly Community (BFC) by the League of American Bicyclists (LAB).

In May 2013, five years after receiving an honorable mention, the City of Cleveland has finally joined the ranks of 259 other communities across the country and now holds the distinction of being a bronze-level Bicycle Friendly Community.

We all know it is an exciting time to be on a bike in Cleveland, but there is still work to be done. Over the past two-years advocates have worked with the City of Cleveland to help pave the path for faster implementation through policies like the Complete and Green Streets Ordinance and better enforcement through the Bicycle Transportation Safety Ordinance, which requires motorists to give bicycles 3-feet when passing. While policies are helpful tools in forcing decision makers to think about biking, we still have a long way to go in terms of installation of on-the-ground bicycle facilities compared to many cities on the BFC list.

This is why I write today in celebration of you. The City of Cleveland Bronze Level BFC award was made possible in large part thanks to your continued efforts in growing a strong bicycle culture in Cleveland. Things like:

Our work towards creating a truly bicycle-friendly city does not end with a Bronze Level designation. We need to be bold in the way we are encouraging more people to bike in our city. To be bold we need to continue to advocate for increased investments in connected infrastructure that makes biking comfortable and accessible for people of all abilities. We need to develop policies that incentive biking over driving. We need to show the benefits of biking as a form of transportation, a way to improved health and environment, and a key to building a stronger economy.

Every Clevelander can help in this effort through participation in the many rides and events around Cleveland, by getting engaged in the ongoing dialogue towards creating more bike facilities, by visiting one of the many bike friendly businesses in our fine City, and by becoming a member of Bike Cleveland.