Learning what everyone else is so happy about 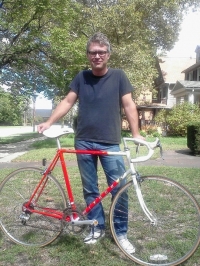 Author Jarrod Zickefoose with his 1989 Miyata 512.

On August 30, 2012, I rode my first Cleveland Critical Mass. Many people reading this were probably there. CCM is always, relative to the weather, well attended, but that one drew more than 700 cyclists.

On a whim the night before, I had decided to go. I had not been on a bike in any meaningful way since college, which was a long time ago, but in the garage, I still had my bike from school, a Trek 810 Sport mountain bike. The front derailleur didn’t work, the seat post was broken, and I only had access to four cogs.

In terms of comfort, that CCM was not the greatest time I have spent on a bike, but the experience was revelatory.

Riding that CCM opened to me, forgive the phrase, a kaleidoscope of potential experience. It opened up a community that I wanted to be a part of, and it opened up the possibility of a communion between body, mind and spirit.

Put more simply, riding a bike is awesome, and doing it with 700 other happy people changed me.

The next weekend I bought a 1989 Miyata 512 road bike. Since then, I have ridden 75 miles in one day with the Lake Erie Wheelers, hit a top speed of 41.5 mph, ridden through blizzards, signed on to ride the MS 150 this August, rescued my bike from a would-be thief, and I have even been hit by a car.

The personality drawn to cycling combines fortitude, a sense of adventure, a masochistic streak, a willingness to put life on the line, a love of the mechanical workings of things, and an appreciation of symmetry and aesthetics. It also capitalizes on freedom, or how we define it in context; in the case of riding a bike: the sensation of fresh air coming into your body, the knowledge that today you can go anywhere you want to. The best rides are the ones where it’s, say, 65 degrees out with no wind. You have no destination. You just get on and go -- and with any luck get lost. With cycling comes an ardent appeal to one’s sense of exploration.

Most sporting endeavors side with the team or with the individual – soccer and tennis for example. Cycling appeals to both, potently.

Riding CCM that night, the camaraderie was palpable, as it is on most of the Mass rides. Anyone who’s ridden one knows the sense of good-clean-fun joy both experienced and expressed.

Once you start to get your legs and lungs, new experiences present themselves. Drafting in a line at 30 mph, for example. Language lacks a word for the sensation, which is one of control in the midst of chaos.

But long, solo rides on Saturday afternoons also offer solitude, silence, the meditative hum of the chain working through the drive train (and your satisfaction from knowing it’s clean).

Cycling is something I am still new to, but I now own a pair of, what I call, butt shorts. They are padded. They are Lycra. I have yet, barring deference to injury, to turn down a bike ride. It’s now fun to get dressed up, because if I put those silly shorts on, I know that I am about to bury pavement.

More importantly, I know that I am about to learn something.

The best way I know how to express what happens when you follow a bike is like this: In the dead of winter, I would set out for a ride, hating the whole idea of it (but also knowing that you attain automatic badass status for rides in sub-30-degree weather). Each time, when I got home, I found myself talking to my bike. I would put it in the garage, survey what would need cleaned the next day and, dizzy with endorphins, say, “We can still go faster. We can go farther.”

That’s the thing I have come to learn about riding a bike. It always insists that you do it again.