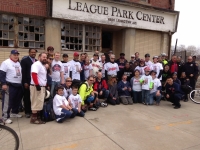 Bob Polk of Bob's Bike Tours has been offering guided tours of Downtown Cleveland, Ohio City, and Tremont since 2011.  He is now also the face of Cleveland Bicycle Advertising, providing an eco-friendly, fun, and personable alternative to ho-hum advertising.

Bob's passion for bicycling, baseball, and Cleveland lead him to start an Annual Ride for the Tribe.  Bob said, "I was sitting in the bleachers at an Indians game in late September 2011, it was the 7th inning and, if I remember, we were on our fifth pitching change, which gave me plenty of time to daydream.  I was thinking ahead to next Spring, and thought, how about a bicycle ride to the game!  What a perfect way to kick-off the bicycling season."  He thought, combining the three things he loved; riding, baseball, and Cleveland, this was a no-brainer.  As they say, the rest is history.

This years' 2nd annual Ride for the Tribe was held on Monday, April 8th, Opening Day.  It is a charity event to benefit Cleveland Indians Charities and Ohio City Bicycle Co-op.  Cleveland Indians Charities include Boys and Girls Clubs of Cleveland who are known for inspiring and enabling young people who need us most to reach their full potential as productive, caring, responsible citizens.  The Cleveland Baseball Federation provides equipment for children in the inner city to play ball.  The Ohio City Bicycle Co-op is a volunteer-driven, cooperative, non-profit, bicycle education center.

Fifty-five riders met at Nano Brew Cleveland.  They were greeted by juice, bagels, and cream cheese provided by Dave's Markets in Ohio City.  The riders started spinning their wheels at noon with a full Cleveland Police escort to the original Home of our Tribe, League Park at East 66th and Lexington.  There we learned about plans for the new park from Councilman, T.J. Dow.  The park should be nearing completion by our 3rd Annual Ride for the Tribe!  Bob had some history to share about the park and the many famous players that roamed the field.  Jerome T. White, a local artist from Cleveland, was also on hand to talk about his nine murals.  They will be featured at the new park which include Cy Young, Babe Ruth, Larry Doby, Bob Feller, and other greats who once played at this historic site.  One of Bob's favorites is a mural of Jerome and his son, Solomon sharing memories of our national pastime.  Before jumping on our bikes we powered up with Good Greens Bars donated by Keith Pabley whose headquarter is based in Shaker Heights.

It was then time to get back on our bikes and head down Euclid Avenue to our next stop in Downtown Cleveland, The Baseball Heritage Museum located in The 5th Street Arcade formally known as the Colonial Arcade.  The museum features stories, photographs, letters, programs, uniforms, and memorabilia detailing the rich diversity of baseball.  About seventy-five people jammed the place.  Bob Zimmer, one of the museum founders, was our host.  He was sharing stories about the old barnstorming days, and how Cleveland played an integral part in baseball history with many great Negro League teams and players from our area.  After mingling around the museum it was time to hold the raffle.  They had over 40 prizes donated by many local merchants.  Bob said, "Without the help and generosity of our local businesses this event would not be possible."  The grand prize for the day was a new Schwinn Hybrid bicycle, won by Rickshaw Willie from Akron who provides rickshaw rides throughout the area.  They all knew that this bike would be put to good use.

Then it was on to Progressive Field to watch Our Tribe battle the Bronx Bombers.  Bicycling, baseball, Cleveland, the thrill of our National Anthem, the smell of hot dogs in the air, the roar of the crowd, smiling faces overwhelmed all.  Bob said, "Just when I thought the day could not get any better...I look over and see my 7 year old grandson, J.J. being interviewed by John Anderson from WKYC TV who covered our entire event.  His question to J.J. was, "What is going to be the best part of your day?"  J.J. stopped and pondered for a few seconds then confidently replied, "Riding my bike with my grandpa!"  This will surely be a day that will stay with me the rest of my life.  Cleveland is truly, "The Best Location in the Nation!"

After all was said and done over $2500 was donated to Cleveland Indians Charities and The Ohio City Bicycle Co-op. Thanks to all who participated!