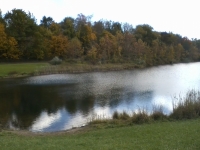 Have you ever heard of Indigo Lake?  What about Cascade Park?  Well, if you haven’t, then you should seriously think about Biking Abroad on the Ohio and Erie Canal Towpath.  For just two dollars, you can load your bike and take a train ride north or south on the Cuyahoga Valley Scenic Railroad.

This was a late discovery of mine during the beginning of August.  After the Lakewood Criterium and three mountain bike races, I met my friend Mike at the Independence station off Rockside Road.  We had perfect timing for the 12:00 train south to a stop called Botzum.  We rode back north and decided to extend our summer ending ride onto the Cleveland Metroparks cement trial.  The total train ride is a little over an hour and that means time to talk about our beloved hobby and stretch your hamstrings on the vintage train.  From Akron, the bike ride is about twenty eight miles.

So, maybe you’re a hardcore road cyclist or cyclocross rider.  Take the train south from Independence to Brecksville.  Practice your hill climbing on some thigh burning hills riding up to State Route 82.  The Metroparks reservation there has some tough climbs and fast descents.  Or, take the Towpath to the trail extension called “The Old Carriage Trail.”  This rocky climb will eventually link up with a little known cement trail for westsiders called the Summersweet Trail.  It runs north and south and parallel to the Towpath.

Did I mention the train serves beer?  The crushed limestone path features tunnels, wooden boardwalks, huge bridges, and plenty of season scencery.  So, maybe you want to take the whole family out for peloton of little people.  Take the train south to Peninsula.  They have some restaurants to pick from and bike to rent.  Stop at the farmer’s market for snacks, pumpkin picking, and a corn stalk maze along your way back north.

Need more highlights?  The mostly straight trail hosts a very old printing press, a dozen canal locks, open fields, historical kiosks and a wetlands area.  You’re mainly in the Cuyahoga Valley National Park, so you’re bound to see animals, birds by the river, and nature at its finest.  Feeling a need for some risky riding, I rode my rig along the cement edge of the canal’s fifteen foot wall, and slid down the giant stairs in Cascade Park by the Akron Northside station.

The trail is open year round, even at night.  Biking Abroad with the train starts April 2013 on select days.  This is another place I know that doesn’t make fun of you for wearing clip shoes.  Enjoy the ride!