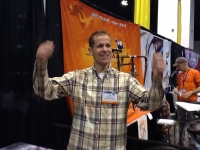 Throngs of folks tumbled through the doors of the Denver Convention Center over the 3 days of the North American Handmade Bicycle Show--NAHBS 2013--in February.

As I walked the aisles, I met people from all over the U.S. who have many different reasons for attending a handmade bicycle show - not the least of which is to see beautiful handmade bicycles!  There were families with kids in tow, couples looking at tandems, and more than a few people who use the occasion of NAHBS each year to meet and catch up with one another even though they live far apart and have full, busy lives.

But, there is also a thread weaving the show together at a level that the ticket buying public probably doesn't see or even think about; it's the relationships among and between the different builders and their work.

When gathering at the yearly NAHBS show, they tend to use their free time to discuss their trade.  Many of them lead rather isolated and distinctly individualized lives the rest of the year,  even with free and ongoing access to information via the Internet,

So, a question might be raised "are these builders competing with one another?"  And, the answer is yes... and no.  Out of many conversations with a variety of groups of builders, it became obvious that the competitive aspects of the show truly aren’t the point.  Even taking deposits for bikes, always welcome by every single frame builder there, isn't the "main focus".

Rather, it's a place for camaraderie and exchange of ideas. It's a place for validation of philosophies and methodologies.  To that end, I had the distinct privilege of emceeing an event on Saturday that perfectly illustrated the true sense of that willingness to share ideas and experience.

If you are not familiar with a web site called Velocipede Salon (www.velocipedesalon.com) and want to know more about both the handmade frame business AND many of these incredibly talented craftsmen, I might suggest that you take a look.

There is a section of the Salon called "smoked out" and it offers a builder the opportunity to “speak” to those interested in his /her work as well as offer up distinctive philosophy to other builders.

Once you have been “Smoked Out" – you’ve had YOUR say - the forum is opened up for discussion.  Many of these builders have thousands of threads come out of their initial conversation with the reading public; and many have become known to a whole range of new fans.

The session was live in the ballroom of the Crowne Plaza Hotel, as well as on the Internet as a live web cast.  (http://www.ustream.tv/recorded/29519885).  For 90 minutes we asked and they answered, with heartfelt responses. They dealt with questions from the mundane to the practical to the philosophical: how long is the lead time for a frame? Can you make a living at frame building? Where did you learn to be a frame builder? Do you have a second job? And why do you build frames?

I personally know a lot of these builders; I’ve interviewed most of them (or will soon).  They are all so incredibly talented and savvy and smart.  And, they are all so very different from one another! These frames are everything from utilitarian workhorses to veritable works of art and the sheer magnitude of talent all in one place is breathtaking.

This was the fifth time I’ve attended NAHBS and even though the weather didn’t cooperate, I think it was by far the most enlightening.  NAHBS 2014 will be in Charlotte, NC and perhaps you might just want to make a special trip to see for yourself.

Listen to the Outspoken Cyclist on WJCU, 88.7 FM or go to outspokencyclist.com.

Diane Lees is The Outspoken Cyclist.  Diane hosts/produces a weekly radio show at WJCU-88,7FM on Saturday evenings in NE Ohio at 5:30PM Eastern Time and podcast at outspokencyclist.com or wjcu.org/media/audio/outspokencyclist at 6:30PM.  Diane owned and operated a bicycle shop for 39 years in the NE Ohio market.