Fall back. Spring FORWARD. But always reflect: The season of giving. Does it ever really end? 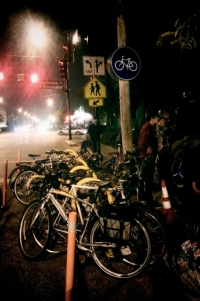 As we pedal further away from the traditional “season of giving”, and into the start of spring I am reminded of the many incredible times throughout the last year that the cycling community has given back to their own. From fix-a-thons, to charity rides, to accidents, to unfortunate deaths; the cycling community here in Cleveland has given back whether it involved a bike or not. That is how we are. We are a close knit community. All of Cleveland really is. A small town where everyone knows everyone through some degree of separation, in a big city. That’s what makes the common denominator of two wheels such a unique tie.

There are so many beautiful stories to tell when it comes to giving and receiving, but one that struck me in particular. It was one of the many incidents involving hit and runs this last year. Hit and runs involving cyclists that is.

Reflections from September, 2012:
Upon my return home from the west coast, I was catching up on Facebook happenings from my week (and a half!) away from technology. (Yes…I do step away from Facebook!) I noticed some posts from a dear friend which seemed a little peculiar. Hospitals. Breaks. Bikes…CARS. What??? It was then I found out that the victim from the hit and run on Clifton Blvd was Elizabeth Deering.

Elizabeth loves bikes. She is not a spandex wearing roadie (although she DID survive the Chagrin Valley when I sort of talked her into riding to Jeni’s Ice Cream). She is not a Ray’s/Ramps/Tree hoppin’ mountain biker. She is not a kid trailer totin’ mom in the Metroparks. She just simply, loves bikes. In fact, she was a sort of “late bloomer” when it came to the whole adult biking thing, and finding a new love.

“For my 28th birthday, my parents bought me a cruiser bike.” She reminisces. “I remember my Mom saying she told her coworkers they had bought their daughter a bike for her birthday, and amusingly everyone assumed that meant I was about 12. Hahaha I had been riding my grandma's old cruiser and it was quickly becoming more of a bikes-shaped sentimental ornament rather than something to ride. I started riding around town with my friend Lindsey Bower and was definitely the little one going "wait for me!!" rolling around town with her crew. But she was patient and always encouraged me. And I got a little faster.”

The love of bikes only grew from there.

And in August of 2012, she was doing what she loves, surrounded by people she loves when the accident occurred.

Says Elizabeth: “Two days after my 30th birthday, I was hit by a car on my way to the Hot Pants Ride. Erin Gay and Julie Briestensky came to my rescue."

That car? Left the scene.
People attempted to grab a plate number. EMS was called. Elizabeth was knocked unconscious and suffered multiple injuries. Her bike was destroyed. It was unbelievable!  And what was even more unbelievable? Her second bike was stolen at the scene when her friend ran to her side.
This horrific event, however, does get better. I promise.

Insert another bike loving woman that we all know and love: Lindsey Bower.

See, the Hot Pants Ride, is an annual themed bike event put on my Lindsey and Dan of Crank-Set Rides. When Lindsey received the call of her best friend’s status, she not only made the decision to be by her side immediately, but she made the decision to fix this the best way she knows  - by calling on her family: Cleveland’s cycling community.

Quick action was taken and like THAT a donation website was circulating around the bike world. (Secret action! Elizabeth didn’t suspect a thing!)  Cyclists and friends contributed money to help cover medical costs, help cover bike repairs and even to surprise Elizabeth with a new piece of gear or two. Plans were made for the gift delivery. All the while updates were given on Elizabeth’s status and recovery. This was surely quick thinking on Lindsey’s part, and a collaborative warm fuzzy of awesomeness for everyone involved! (Yes, that second part is Shelli-speak.)

On the night of October 2nd, over 45 people gathered together to deliver happiness to someone who so deeply deserved it. In true Crank-Set style, the surprise was incredibly well orchestrated… Most folks met in Ohio City to ride to Lakewood together, while a few key peeps got the bikes ready for delivery.

Bikes. Yes…BIKES. Through generous donations, Crank-Set was able to not only give Elizabeth a new bike, but also bike gear, a few fun spirit lifting girly things (read: bike totes & stuff) and even write a check to cover some of the medical costs. But it doesn’t end there! To make up for the loss of two bikes, an anonymous donor paid for a second bike to be given to Elizabeth that night as well. Warm fuzzy? DEFINITELY.

After our crew made the second stop to meet with folks at The Root Café, we quietly rode to Elizabeth’s street. At the corner, we met with the special bike deliverer and a few others and together walked in silence to her house. Standing in her lawn, in the dark, we waited. Lindsey, who used “come to Taco Tuesday with Dan & me” as the decoy, went to the door to summon our friend. Elizabeth walked out to a front lawn of bike bell jingling, light twinkling and…HER BIKE FAMILY.

I probably do not need to describe the tears of shock. Tears of joy. Sighs of relief. Feelings of love. Or the smiles. Or the hugs. Or the overall beauty of the night! Instead, I will let you read the words of Elizabeth:

“5 1/2 weeks later, I look like my old self. I can bend my knee ALL the way. I can use my left arm, and my broken bones are only a little achy. But I'm not my old self. I'm better. Maybe not my spleen... But in every other way, it's like the lighting in my world shifted. I knew I had amazing friends and family. But I never, ever imagined how amazing. I am so proud, and humbled, and honored, and grateful, and lucky to call all of you friends and to have you in my life. Thank you from the bottom of my heart. I wake up different, and better, because of all of you.”

THIS is what it is all about. It is always the season of giving. Reflect.