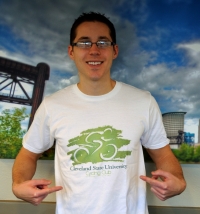 The Cleveland State Cycling Club is building much hype, and is in the beginning stages of becoming the most exciting school organization on the CSU Campus.  With already 180 "likes" (and counting) on Facebook, students have been engaging throughout the Internet and exploring the new club's personal website (www.CSUCyclingClub.org), where they learn about great reasons to join. For example, club President Michael Hach has been talking with local cycling shops such as Fairview Cycle, Century Cycles, and Cleveland’s new Velodrome, to get CSU Cycling Club members discounts on bicycles, parts, and accessories.

Hach doesn’t intend to make club meetings a “bike gang hangout” but would like to bring cycling advocates together in order to increase the vibrancy of Cleveland. Toward that end, he has developed a plan for the club coined, “Operation red”, (Ride, Educate, and Develop).

The riding segment of Operation Red will include rides such as “Pedal to the Point”, and “Pan Ohio”. The club is currently accepting donations for the National Cancer Society, and MS.   As for the "Educating" segment, regular meetings will be held on campus. Members will not only learn how cycling improves personal health, but also the vibrancy of our city. A careful urban analysis will be produced collectively from active members.   The last component of Operation Red, "Developing," involves the creation of innovative ideas to promote and increase the number of students cycling to class at Cleveland State University, such as adding more bike racks on campus, the construction of bike lanes, and future projects such as “Bike Box” sheltered bicycle parking.

Members who have paid the $20.00 initial fee to join the club will receive a t-shirt, and a membership card. The membership card will give members the opportunity to retrieve discounts from local bike retailers. If you are interested in joining the club, you can find them on Facebook/csucyclingclub, or their personal website.