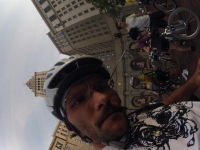 Joe Schneider had no idea he was being photographed. But as he pedaled his loaded bicycle to work snowy Lorain Road in the coldest weather Cleveland has seen in the last two years, someone snapped a picture. Then the picture ended up on the WEWS News Channel 5 Facebook page. And a stream of comments—more than 200 as of this writing—quickly followed. Commenters ran the gamut, from scorn to admiration. Lots called him crazy. They said what he was doing was unsafe. They made assumptions about why he was riding a bicycle in the icy cold.

“very foolish... with snow/ice creating more potential for drivers to slide into you.”

“Makes me sad, maybe that was their only choice. “

'Probably got a DUI and had to get to work.”

Schneider only learned about the picture when his friend Brad Sweet, who works at Century Cycles, recognized his gear in the wintery photo.

Great Lakes Courier got in touch with Schneider to get the back-story, especially to address some of the assumptions people had made about his lot in life and his relative sanity.

First, it should be noted that Schneider was wearing a helmet, a bright yellow jacket, and other cold weather gear. And of course he was fully within his right on the road.

The people who assumed riding a bike is his only form of transportation were correct: Schneider says he doesn't own a car, or even have a driver's license. But it's not because he can't afford it. Schneider was going to work at his construction job.

“I do general construction and landscaping so my commute varies, it was 8 miles that day, Kamm's Corners to Tremont. That day [it] took me a little over 45 minutes. [The] same commute would take 25-30 min. in average conditions.”

Besides riding to work, Schneider also pedals for fun, cycling to Mentor most Summer weekends. He rides to volunteer at a community meal at his church. He participates in Critical Mass.

Neither is he relegated to his bicycle by any legal mandate, like one commenter's suggestion that he couldn't drive because he had been cited for DUI. That's not the case.

“I don't own a car or have a drivers license by choice,” he says. His motives include the challenge of the ride, the fun of it, the cost savings, and the environmental benefit. In short, the same rlist of reasons many commuters would cite.

The bike he was riding that day was a Surly Long Haul Trucker, which he bought at Century Cycles. He also has a fixed gear bike from the Affordable Bikes Recyclery—a new shop in the old Schneider's location on Lorain Road near Denison.

Alternate Transportation and cycling advocate John McGovern noted that in the long stream of Facebook comments, the negative was more than balanced by the positive. That's a departure from the norm in Cleveland's social media and call-in response to cyclists on roads.

“Fully 85% of the comments are supportive of the cyclist. This may be a watershed moment for CLE cycling,” McGovern posted.

Schneider's own take on the situation is from the practical cyclist's point of view—which several of the commenters also held: that the real danger in the situation came from the distracted driver using the camera.

“I have no Idea who shot that picture,” Schneider said. “I'm just glad they didn't hit me while they were being irresponsible.”