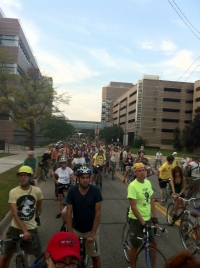 What kind of rider are you? Avid cyclist? Weekend Warrior? Errand runner? Whether its’ a weekend ride through the Cleveland MetroParks, a quick ride to grab some veggies at a local farmers’ market or taking yourself to work and back everyday, NE Ohio is never lacking for cyclists.

Many of you know that there is an international event held monthly (inCleveland, the last Friday of every month) called “Critical Mass” that brings cyclists of all kinds together. Critical Mass intends (in part) to raise awareness to non-cyclists, especially those that drive cars to the fact that cyclists are everywhere and that we indeed have every right to be there!

Critical mass is a nice ride with a steady pace that takes riders throughout various neighborhoods inNE Ohio(commencing atPublic Square). The roads get taken over by cyclists that hoot and holler: “Happy Friday” and wave and ring bells and blow horns and smile and make folks happy**almost** everywhere we go.

August's ride took cyclists down Euclid Avenue, around the Cleveland Clinic some and on a nice ride through the community ofFairfax. This ride is said to have attracted a record number of cyclists (roughly 740 reported on various posts on FaceBook) and the weather couldn’t have been better!

All was going well: really well. Until what has been discovered to be a last minute decision to route ourselves down East 4th street, right around 8:15 (or so) p.m. Most of you know that East 4th is a pedestrian friendly avenue loaded with restaurant and show-goers. Imagine trying to shove 700+ cyclists down this small path with the idea that a “mass” continue to our end point onW25th Street; if you can’t picture this successfully happening, that’s because it didn’t.

Many riders backed out and went around the East 4th adventure, the bulk of riders chose to walk their bikes…at a painstakingly slow pace (I was there) down East 4th where no one was really waiting to remake the “mass” at the other end.

The ride quickly became very scary for many of us suddenly pulling up the tail end of the ride (we were in the middle before). Our street blockers were gone, cars were edging into where we were riding, police were trying to stop us, we (sadly) backed traffic up for blocks and blocks. The sun was setting, the mass was gone and folks were yelling and swearing at (albeit totally rude and somewhat reckless drivers) folks in cars…something that made me shudder some. We have the right to be there but in this case, we were very wrong. Riders were driving into traffic, disobeying traffic laws and generally being a bit of a nuisance…I was one of them and I can honestly say; it was all in a desperate attempt to re-join the mass: we were scared folks.

The most severe incident of the evening came about when a Critical Mass rider was shot in the face with pepper spray from a passenger on an RTA bus. A reckless and deviant act that thankfully didn’t happen to kill anyone (and I am not being dramatic! Imagine if this rider had fallen into traffic, imagine if others trying to avoid him had: this is a horrifying incident on so many levels). Several comments on the Critical Mass FaceBook page reflect what so many of us who heard that news must be thinking: scary, sad and NOT keeping me off my bicycle or away from Critical Mass!

Special thanks to all the folks who stopped to help this rider (and all the others along the way) and a lesson to us all…keep the mass together (remember grade school? Power in numbers people!), remember to have and use appropriate safety gear including helmets and lights, have enough confidence in yourself to make a better decision (we hemmed and hawed over going around East 4th and were too afraid to “lose everyone” that we didn’t…that did not pay off!) when needed and that while we DO have the legal right to be on the road, we are smaller than vehicles, people can act irrationally (scary really) and that above all else, especially while we are trying to draw attention so folks recognize and respect the fact that we’re there, we must be respectful as well…’cause that’s how cyclists roll!

I love to ride my bicycle! I am an avid errand runner and leisure bike rider. Recent victim of bike theft (broke my heart) has made me a bit gun-shy about where I will park/lock my bike...I have an awesome, totally comfortable and fully functional for errand-running bike...and I loathe the idea of losing another one! I love (love!) riding my bike...from Critical Mass to local farmers' markets to friends' house's for dinner and a drink. There is nothing like riding your bike!