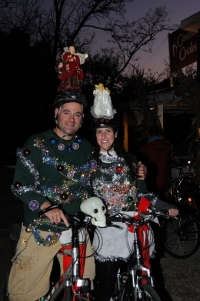 Great Lake Christmas Ale was the inspiration for a costume worn by bicyclists at the 2011 All Hail the Ale Night Ride for Cleveland Beer Week. This year's ride is scheduled for October 20.

Celebrate Cleveland Beer Week on two wheels -- and pay tribute to the long tradition of the post-ride beer -- at the 3rd Annual All Hail the Ale Night Ride on the Towpath Trail on Saturday, October 15, at 7:30 p.m.

This free nighttime bicycle ride will begin at Century Cycles bicycle store in Peninsula (1621 Main Street/Route 303) and will end at the Winking Lizard Tavern next door with the tapping of a special Sieer Nevada beer provided especially for the event. For more information, go to www.centurycycles.com/for/CleBeerWeek or call 330-657-2209.

An official Cleveland Beer Week event, the All Hail the Ale Night Ride is held in tribute to the special place hopped beverages hold in the hearts of many bicyclists, and the beer theme is carried throughout all aspects of the event:

In 2010, Century Cycles conducted an online survey to ask Northeast Ohio bicyclists which style of beer they prefer after a bike ride. The overwhelming favorite among the 114 respondents was Ale/Pale Ale/IPA, which garnered 44% of the votes. That was followed by Wheat/Belgian (21%), Porter/Stout (18%), Light Beer (10%), and Lager (7%).

While the Night Ride is FREE and requires no advanced registration, Night Riders must sign a waiver before participating and are responsible for the purchase of their own beer and food at the Winking Lizard. This ride is at night, in the dark woods on an un-lit trail. That is why bicycle lights and helmets are REQUIRED. Children under 16 must be accompanied by an adult; young adults under 21 should ignore all the excitement about the beer tapping. Finally, make sure those beer costumes don’t hang or catch in a bicycle’s spokes or chain (falling off your bike tends to ruin the fun) and that you can still wear your bike helmet in costume.