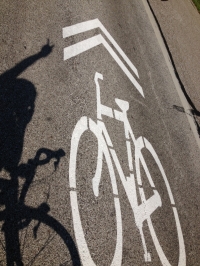 Sharrows along the Valley Parkway in the Cleveland Metroparks

One year ago this September, 125 bicycle advocates, business leaders, and community residents gathered at Windows on the River in the Flats of Cleveland with one mission: to develop a strategy for making our region more bike-friendly.

At that gathering, known as the Bike Cleveland Summit, Cleveland birthed a powerful organization with a vision to dignify cycling, a vision to advocate for more infrastructure to accommodate the growing number of cyclists in our region, and a vision to unite the cycling community and to grow a thriving cycling culture in Greater Cleveland.

Since that time Bike Cleveland has grown from an organization that was just an idea to one with dedicated staff, committed volunteers, and over 220 members. In one year we, as a unified voice, have made great progress in making our region more bike-friendly. Here is a snap shot of our progress:

-          Worked with the Cleveland Metroparks to pilot a sharrow program in the Rocky River Reservation to decrease car-bike conflicts.

-          Secured a commitment, and funding through the City of Cleveland, to construct 1.7 miles of bike lanes on one of the most heavily biked corridors in Cleveland, Detroit Avenue.

-          Worked with the City of Cleveland to pass the Bicycle Transportation Safety Ordinance which provides better protection cyclists on our public roads, including mandating that cars give cyclists at least three feet of room while passing.

-          Reached out to necessity cyclists in the Glenville neighborhood, and partnered with Bike Cleveland member Krissie Wells to reach out in Ohio City through neighborhood Fix-a-Thons, thereby getting more than 100 working bikes back on the streets.

-          With the YMCA secured funding to develop a street-typology with the City of Cleveland that will help prioritize future bike infrastructure investments.

-          With LAND Studio, developed the BikeBox: an innovative covered on-street bike parking solution that will be piloted this fall.

This is just the beginning. In September we will be releasing a “Call for Artists” to help develop imaging and messaging for a public awareness campaign to promote bike safety. We will also be working with the Cleveland creators of the internationally-renowned Yehuda Moon and the Kickstand Cyclery, Rick Smith and Brian Griggs, on developing an Everyday Cycling Guide to help encourage more people to commute by bike more often.

Most importantly, we will be seeking your feedback on what your priorities are for biking in Greater Cleveland, and be working them into our ongoing advocacy campaigns. Watch our website (BikeCleveland.org) and Facebook page later this month for more information.

While we see great progress happening, as you read in my article in August’s edition of the Great Lakes Courier, there is still a lot of work to be done. Our region needs to assert itself as the place where biking is safe, fun, and stress free. To do this Bike Cleveland needs your support. Become a member of Bike Cleveland today and join the 220+ advocates who support our continued work to make Greater Cleveland a bike-friendly region.