We Are Not In the Top 50 Anymore 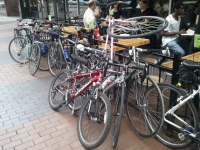 Noodlecat on Bike To Work day in July

In 2011 Cleveland graced Bicycling Magazines list of the 50 most bicycle-friendly cities, coming in at #39. Despite progress, including the opening of the Cleveland Bike Rack, the passage of the Complete and Green Streets Ordinance, and the addition of sharrows on a few Cleveland streets the city of Cleveland failed to make the list in 2012. While bicycling across Greater Cleveland continues to grow, in fact the number of people commuting to work by bicycle increased four-fold from 2000 to 2010, there are dozens of cities across the country that are progressing much faster and more innovatively than Cleveland.

The City of Cleveland needs to innovatively prioritize bicycle infrastructure, and get it implemented at a much faster pace to keep up with our peer cities. Other cities are significantly outpacing Cleveland in their efforts to positively transform their respective city through bicycling and embracing a vision that provides direction towards a future city that is desired, rather than one that furthers the status quo. For example, in Chicago Mayor Emanuel has made a commitment to install 100 miles of protected bike lanes and bike boulevards over the next 4 years. Just imagine what a commitment like that would do to increasing the number of people biking in our fair city (currently the City of Cleveland has 8.5 miles of bike lanes).

With the Complete and Green Streets Ordinance, the City of Cleveland now requires street repaving and reconstructions projects to include bicycle facilities.But, like Chicago, we need to ensure these facilities are in line with what is being built across the country. Thinking beyond sharrows and reallocating our street space with separated bike lanes and cycle tracks will do wonders in encouraging more people to bike more often. With street infrastructure that is built for well over 1 million people, our streets can certainly handle less space for cars, and more space for bicycles and pedestrians.

We also need to ensure the adoption, and enforcement, of policies that make our streets safe for all users. The Bicycle Transportation Safety Ordinance that Bike Cleveland worked with the City of Cleveland to adopt on June 4th include some of the most progressive laws in the state to protect cyclists on the road, including a 3-foot passing requirement when cars pass a bicycle on the road. Through public awareness, Bike Cleveland is going to ensure the new laws are known and enforced. We will also be working with neighboring communities to introduce them to the bike-friendly policies, and advocate for adoption.

Over the next few issues of the Great Lakes Courier I will be providing you updates and information about bike facilities and policies that our communities can support that will make our region more bicycle-friendly, and explain how Bike Cleveland, with your support, can make them a reality. On that note, we cannot do it alone. Support Bike Cleveland by becoming a card carrying member today, you can sign-up at BikeCleveland.org/membership. With your support we will make on Bicycling Magazine’s list as one of the 50 most bicycle-friendly cities in the nation.