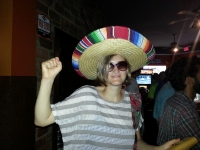 How many heads was this sombrero spotted on?
View Image Gallery

There are a lot of Taco Tuesdays out there. Something for everyone really. From your traditional tacos at the long standing CLE Mexican restaurants, to the foodie spins at bars and eateries to the bizarre "why does that German/Irish/Italian place have a Taco Tuesday?" venues.

We pedaled over to one of the city's TT faves (which, btw, falls into the last category above) and as we waited for our food, we started to talk about the array of choices we have around town. Where they were located. What their specials were...blah blah blah...and I said:

"Dude. What if we did a Taco Tuesday crawl on bikes?"

And this is how Tour de Taco: A WesTown Taco Tuesday Hop began.

There is a nice healthy handful of Taco Tuesdays within the West Park neighborhood. Let's take a look at 4 of the most popular:

SO...after figuring out which ones we could/should hit within a given timeline (aka: after work, til the places close), the event was born! http://goo.gl/Jr6VQ (yes, that would be a link to said event. Go on...type that in yer browser as you read this.)

First things first...warn the restaurants. While it is awfully fun to just wander around with a group of pals to various joints in the name of tortillas filled with stuff, it's a good idea to let said joints know you might be arriving with 6 or 60 of your closest pals. Ya never know what happens when you release the word on Facebook, right?

Luchitas, was none too happy to welcome us as the first stop! Known for some of the tastiest mole and guac in town (La Cabra is the bomb), their margarita is what shines quite often in reviews. Fresh made, refreshing...and strong. And you can bet a lot were being made that night. And enjoyed! Whenever you stop in, be sure to give some love to Eduardo & Jess...they are fab folks who work hard to make sure you dig the grub and drink.

As I spoke with Jason, the mastermind behind the Lion on Lorain, I asked him what he thought of the idea overall and if he would be down for creating some special bike themed tacos for us on July 17th. Not only was he down for it, but he embraced it! And thus, the Hipster, the Roadie and the Co-op tacos were born! I mean, really? Ground Beef, fried salami, shredded provolone, romaine lettuce, drizzled with virgin olive oil and Cajun mayo? Hello? This was so good that he sold out that night and featured it the following Tuesday in his next line up. Show some happiness and give JW a shout-out next time yer in. That man is one of CLE's best kept foodie secrets!

So...where was I? Oh..ok. So yah...slapped the idea out there to the Facebook land, and lo and behold...July 17th was here before ya knew it. A few of us started pedaling from University Circle to meet up with the road brew crew. (don't ask, just roll with it)...After merging pedal parties, we all arrived at Luchitas to find many bikes already strapped outside. A great sight! Once inside, we were split around the two rooms and enjoying our yums and bevvies. More folks poured in, more yums and bevvies were had. And 7pm came before we knew it.

Time to head to the Lion! (Note: somewhere along the way, a rather large sombrero appeared.)

The Lion already had some of the bike crew present, and more joined in after we were all happily downing beers and comparing notes on the taco selection. I had received a text from an early diner who raved over the Hipster, so of course that was the first one I tried. OMG. Love. I had the Co-op as well....which was pretty darned tasty too. Saving room for a sample of our next stop (and to be honest, I had a bit too much La Cabra at the stop before), I didn't get to try the Roadie...but I heard it got the thumbs up too.
The place was packed! And the sombrero seemed to be workin' the room. But at 8:30...we had to depart...we had one more stop to make!

Lots of two-wheelers were pedaled down Lorain, and we found some of the crew already settled out on the patio. Guess we better get in and order! Buy one get one half off huge margaritas seemed to be the norm...and their chips & salsa were never ending and yumtastic! Speaking of yumtastic? Their tacos are huge! A lot of us were already quite full, but man, we had to down a couple of those for sure! And they were quite tasty. And? Served with a smile. Even with our musical sombrero act. Of course we closed the place out.

All in all, the Tour de Taco was a success, if I do say so myself. And others say so too! A couple of after event reviews:

"I would just like to make sure that it is pointed out how phenomenal a job all three venues did while dealing with our rather large group descending upon them, and say that I would recommend any of these establishments for a great meal and great times!" -  Ben S, Captain Taco

"The Hipster Taco at Lion was the best thing hands down." - Ben O, Recumbent King

"It was my first taco ride, and I had a blast. I may forgo Tuesday volleyball for Tuesday tacos from now on. The staff at all 3 places were super friendly and extremely accommodating. I think Si Senor won for me in terms of best Margarita Presentation- those big thick giant glasses were way fun. The Hipster taco at Lion was amazeballs. Luchitas had some awesome guac & chips (I stole some from Jerry)." - Christina Z, Bike Safety WonderGirl

So, without further delay (because I tend to babble), I would like to announce the Tour de Taco awards! What would a Tour de Taco be without the awards?

Best Margarita: LUCHITAS.
I mean, really: even a non margarita lovin peep would suck a few of these puppies down! They are fabulous! You really should try one...or three.

Best Chips & Salsa: SI SENOR.
What is it that they do to those chips that no one else seems to do? And the salsa...simple, traditional, flavorful! You don't mess with perfection.

Best Taco: (drum roll please....) LION ON LORAIN!
I mean, did you have to guess? The Hipster? Keep an eye out on their FB site for their Tuesday creations folks...it only gets better!

Congrats and Muchas Gracias to ALL of the participating taco joints for their service and fantastic food and drinks! I am sure this won't be the last time you will see many of us taco lovin pedal peeps!

Bikes + Beer + TACOS = a Fabulous way to spend a Tuesday evening in CLE :)