More Than A Pothole 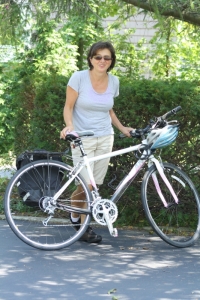 Jane and the pink Giant

There were two things holding me back from buying my now four-year old Giant FCR – one, it had pedal clips and two, it was pink.

As a fifty-something year-old who was buying her first “real” bike, these were important issues.  The nice guy at Century Cycles was philosophical, “Just accept that you’re going to fall over at least once…but you’ll get the hang of it.”  I thought that was good advice and I really liked the bike, so I bought it.

As for its being pink, I’ve embraced it – the Pink Giant and I have had many great adventures.  And as he predicted, I fell over.  In the driveway.  Standing still.

So, it was my first spring ride on a beautiful, cool morning when the Pink Giant and I set out very early to get in some miles.   I was feeling all the feelings that, for me, make bike riding so great – euphoria, strength, and something close to infallibility.  I was thinking my deepest thoughts, another perk to cycling, sketching out my strategy for world peace, pinpointing exactly what makes my husband such a gem, and finally realizing what color I needed to make our living room décor sing.

All in all, just another great day on a bike.

On some level I was aware of the red SUV coming up behind me, but certainly wasn’t prepared as  the horn blared and a raucous young lad screamed, ”Get off the road, lady!!!”  The other passengers, all young men, thought that was hilarious and their thumping music and wild laughter shattered the early-morning calm.

Anyone who has ridden, I’m sure, has experienced something similar, where a driver decides that your presence on the road is so oppressive to him– even though it’s seven in the morning and there’s absolutely no one else on the road – that he must vent by scaring the offending cyclist half out of her wits.  Mission accomplished.  I was shaken and, of course, angry.

My ying and my yang flapped wildly about. I spent the next several minutes cursing these rapscallions while also wondering why they were out so early, finally concluding that they probably hadn’t yet gone to bed.

So, distracted by all the negative energy cursing through my veins, only at the last moment did I realize that the car stopped at the red light in front of me was none other than the offending young men.  Just as I braked, I caught the eye of the driver in the rear view mirror. I gave a crooked smile, the subtext being, “You’re very young, but I’m older and wiser and so forgive you this time and just hope you realize how immature and, possibly dangerous, you’ve been” – which I’m pretty sure he misinterpreted to mean “I look like a jerk in this helmet.”

But while trying to be the bigger person, I realized, too late, that I hadn’t taken my left shoe out of the clip and was tipping in that direction.

And then I went over. Like a dead tree, cut off at its base.  Thunk.

From my horizontal position on the pavement, I could see the driver in the side mirror.  It was touching; he almost looked scared.  The front passenger, the one who had yelled to begin with said, “Is she okay?” They all got very quiet.

I asked myself the same thing, thankfully noting that all the fat around my hip had finally proven itself worthwhile.  I waved a hand, “I’m okay” and then began the mortifying process of extricating myself from such a ridiculous position.

As I stood up, the light changed, and the band of merry pranksters burned rubber on its way through the intersection, their coyote hilarity ringing in my ears.

My ego and my hip were sore for a few days, but, I got back in the saddle and the Pink Giant and I rode again.

Jane Blackie is a recently retired high school English teacher, so has lots more time to make a fool of herself on her bike.