Keep it Movin': Triumphs & Tribulations of the Lady Cyclist 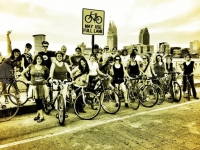 I am a lady cyclist. When you see me riding, there is no doubt that I am a lady. I don’t often bicycle in spandex or other gear that make me appear even a bit androgynous. Indeed, quite the opposite is true. I wear dresses almost every day, ballet flats or lovely vintage Ferragamo heels, and I often ride a mixte decked out with shellacked cork grips and a pink basket containing my purse.

I am a (mostly) confident cyclist and I ride at a reasonable pace (maybe 12mph on the mixte). I make eye contact with drivers whenever possible and have learned to assert myself in traffic. My boyfriend might disagree, but I feel like my riding style is similar to his.

So why am I threatened, harassed, and in general, given a hard time almost every time I ride my bike while he goes months without a single comment from drivers?

I think it’s because I’m a woman.

Some might roll their eyes at such an idea, and I admit, I used to think perhaps I was acting like a paranoid ultra-feminist.

And then I read a very poignant article in Bitch Magazine written by Elly Blue, author of the blog Taking the Lane (www.takingthelane.com). Elly is a biking pro. She loves bicycles so much that she has dedicated her life to writing about them via her thoughtful blog, several zines (worth reading!), and a book that is debuting in December. She serves on all kinds of boards and contributes to furthering bicycling all over the nation. There is no doubt she knows what she is doing on a bicycle. Yet, in this article, she writes about being harassed or lectured by motorists when she rides. On the other hand, when she rides with a male, people tend to leave them alone.

My experience contradicts a concept popularized in the bicycle blogosphere referred to as the “Mary Poppins effect.” This term is used to explain the politeness shown to women who bicycle in dresses, skirts, or other feminine clothes and ride upright—often Dutch-style—bikes. Women who espouse this theory believe that they are shown more respect because they are more humanized than lycra-clad roadies, or that drivers are less likely to want to harm or be rude to women who seem more elegant (à la Mary Poppins!).

Perhaps the story is different in Cleveland. Every so often, I take my mixte out for a ride in bicycling shorts and a tee-shirt. In addition to that, for the past couple weeks, I’ve been riding a diamond-frame bicycle and dressing less feminine because it doesn’t feel safe to me to wear fancy dresses and nice shoes on a bike that moves so quickly. Although I’ve had less time to compare, I always feel a lot more respected when I’m in more stereotypical cycling clothing. People seem to give me more space on the road, no one has yet to yell at me to get on the sidewalk, and cars don’t honk at me for taking the lane when I find it necessary.

The tribulations of the lady cyclist are connected to the fact that our society holds such an antiquated and inaccurate idea of who does and should be able to ride their bikes on the road. It's just plain true that the majority of this country views bicycling as a children's activity or a recreational sport for spandex lovers. The image of a woman wearing a dress is pretty much the most drastic departure yet from this concept.

And this is why it's so important that women ride! David Byrne, in his book, The Bicycle Diaries, chimes in quite eloquently on this subject. As he sees it, “When more women begin riding, that will signal a big change in attitude, which will prompt further changes in the direction of safety and elegance. I can ride till my legs are sore and it won’t make riding any cooler, but when attractive women are seen sitting upright going about their city business on bikes day and night, crowds will surely follow.”

Bicycling has to appeal to women in order for it to become the movement we want it to be. Women will only hit the streets en masse once they are safe for cyclists of all stripes (women, children, the elderly, everyone!) Experienced cyclists need to make each other feel comfortable on the roads. If you have a friend who is hesitant to venture off the towpath, invite them to Cleveland Critical Mass or a Two Wheels and Heels Ladies Ride. The great part about the bike community in Cleveland is so many people are so dang nice! I don’t think there is a more welcoming group of people in the city.

Male cyclists must accept that it isn’t out of the question that women are treated differently when they ride. There’s nothing worse than being told it’s about your confidence, or it’s all in your head. Differences in treatment based on one’s gender exist in cycling just as they do in the real world. We should all be cognizant of that and do whatever we can to move our culture forward.

Women of the world: don’t be afraid to assert yourselves on the road! Take the lane. Look at people square in the eyes. Show them you mean business. And if all else fails, go home and blog about it because not even the SUV that just almost hit you outside of Momocho is going to get you down! Ride on, sistas!

Krissie Wells shares her experiences with bicycle riding and other whimsical activities on her blog, www.krissiemeansbusiness.com.