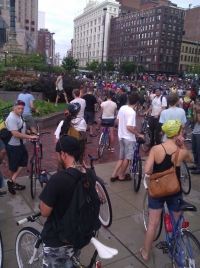 After the deluge, the gathering at Public Square
View Image Gallery

The afternoon of July’s Cleveland Critical Mass ride, my 10th time on the ride so far, started off sunny and cool, a welcome respite from the heat and humidity we had been having lately. Josef and Jerry and Sam and I left about two hours before the ride to slurp some noodles and enjoy $3 gyozas (a special price for cyclists that night) at Noodlecat.

Around 6:00 pm, the skies turned dark and ominous. Josef and I were glued to the radar on his smartphone, wondering if the line of dark red and purple thunderstorms on the screen was going to affect the ride and for how long. Not fifteen minutes later, the wind and rain started. Even so, we saw scores of cyclists pass by Noodlecat. They pedaled hard down Euclid Avenue, two or three at a time, sometimes five or six, more and more bikers, soaked to the skin, but not caring at all. Rainy weather doesn’t stop Cleveland’s cyclists!

When we got to Public Square at 6:55 pm, the place was teeming with cyclists, 250 or more by the looks of it. A little after 7:00 pm, and with a clamor of whistles and bells, screams and shouts, we were off!

We wound around through the streets of downtown, headed east on Carnegie and meandered south through the Central and Kinsman neighborhoods. It rained a little more right after we left, but we didn’t care. We were riding!

People on the streets, people in cars, people on their front porches, all shouted and waved to us, as we shouted and waved and rang our bells back. “Happy Friday!” “Happy Friday!” We motioned to some of the children on bikes to come and join us. One neighborhood boy even rode to the front of the mass on Garden Valley Parkway and was our leader for a minute or two, but unfortunately we had to veto his decision for us to follow him into a development parking lot.

The receptiveness from the neighborhood continued, as we biked through a maze of streets in Slavic Village. People waved and hollered; one man was so excited, he tried to stand on his head for us as we passed by. We rode across Fleet, up E. 49th and then back and forth across smaller streets, zig-zagging across Broadway to our final destination: the newly-constructed Cleveland Velodrome.

Although we didn’t break our goal of 500+ cyclists for July’s Critical Mass, we still had a lot of fun and got to experience some welcoming neighborhoods that many of us don’t normally bike through. Let’s get everyone we know to make August’s ride the biggest one yet!