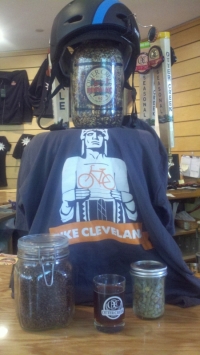 It was way too early to be up, but I pedaled my tired self to the Cleveland Marathon anyhow. I was running the half. Why do I do this to myself? I hate running. And it was early!

After Pedal for Prizes I spent a little too much time hanging with my soon to be adventure partner at Wexler’s. I had panniers to pack. I should have gone home sooner. Got a good nights’ rest.

But I was excited! Why? Because after torturing myself for 13.1 miles in the heat of CLE by foot, I would load my bike, panniers and self into a car for a ten and a half hour drive to….Vermont!

I backpack. And I ride bikes. Two of my passions. I started combining them a few years ago. Some call it “touring”. I call it: BikePacking.

For this year’s week long BP adventure, I wanted to focus on an area that took me through a Locavore’s paradise. A place where farm to fork meets craft beers, meets laid back small towns, meets The Mountains! As I was brainstorming a variety of ideas, and playing on Facebook, a little ad popped up in the corner: The 2012 Vermont Bike & Brewery Challenge! I immediately clicked. And discovered that Vermont has a brewery passport!

I scoured the website. Small family run breweries. Farm tours and Chef demos. Historic towns. Fabulous back roads. This was exactly what I was looking for. So instead of letting someone show me the way (aka, a company), I created my own adventure…The Green Mountain Brew Hop!

The scope of this trip: Plan the route, but not too many details. Eat lots. Drink lots. And Bike til you Drop.
My fellow captain for the CMSC Pan Ohio Hope Team, Bill Wolohan, was up for this Shelli-made challenge. BONUS!

Sunday: After Marathon, brunch & beer at the Tap House (hey! Runner’s get 15% off!) we headed east.
We ended up in Shelburne close to midnight, and set up camp at the Shelburne Camping Area. This is where we left the car for the week.

Monday: After a breakfast of leftover dinner from the night before, we packed up the panniers and headed off…first stop? 4 miles up the road to Magic Hat Brewing Company. Did you know they offer FREE tastings? Welcome to Vermont!

Our goal was Middlebury that day, and along the way we ventured through quaint towns boasting local eateries and shops, down the coast of Lake Champlain with a gorgeous view of my beloved Adirondack Mountains, through rolling farm lands, past covered bridges and even did lunch overlooking the vines at the Shelburne Vineyards (complete with wine and cheese!).

Rolling into Middlebury, our intention was to find a campground. However, after discovering that said campground was at the bottom of a very large gravel road (which we went down, back up and decided against doing again) we headed off to the Otter Creek Brewing Company in search of dinner, advice on the night’s stay and… Well. Beer! (They not only brew Otter Creek, but Wolaver’s Organic and The Shed Brew).

While enjoying the meal and beer samples, I noticed how awesome their yard was. Next thing I know? The manager is happily offering the space for our tents! WHOA! Sleeping next to a brewery? Twist my arm! We bought a 6 pack, got some snacks (Ben & Jerry’s!) and called it a night under the stars wedged between a glorious brewery and a Cabot Creamery. Bonus? The manager brought us breakfast too :)
Miles biked: 43.76

Yah, out of all the Gaps over the Green Mountains, this one is said to be the preferred cyclist route. But there is still the last mile to the top, which pretty much seems like a 90 degree ascent of several switchbacks. We will rename Brandon Gap: Push The Bike Gap.

After toasting our summit with a couple of Otter Creeks (we were schleppin’ 30lbs of gear, might as well schlep some beer!) at the Long Trail, the descent was worth it! I don’t think either of us turned the crank once in 4 miles!

Onward to the historic Warren Store! And more ice cream. And the discovery of: The Alchemist’s Heady Topper IPA. Oh? Heaven. This is when Bill says: “Last night was awesome! Next stealth camping? We gotta find a waterfall.”

However on this night we were headed to Betsy’s B&B in the state capital: Montpelier. So cute!
On our way in, we were escorted by a roadie who gave us some awesome tips. Once there, we did flights at the Three Penny Tap Room, and enjoyed dinner at a great Irish Pub. Miles biked: 77.24

Wednesday: As we started our day, we made two stops before leaving Montpelier: Onion River Sports (yay bike shops!) and the Food Co-op to grab lunch (and beer) on the road. And we were even approached by another roadie, asking if we needed any advice about the area.

Heading north east (to the Northeast Kingdom actually), we did lunch at an overlook and made our way to the Cabot Creamery in Cabot for a tour and tastings. Can you say: Free Cheese??? (we schlepped some wine for this one).

We discovered Maple Creamies (aka: ICE CREAM) on this day. We also discovered that the Trout River Brewing Company is not open on Wednesdays. But, as we rolled through Lyndonville to find a place to camp, we did find Timbuktu’s Bar and Grill, which served plenty of VT brew and great food! We even met a bunch of Shimano reps, out for a day on the famous Kingdom Trail. As we enjoyed a night of good beer, I chatted up with the bartender about where to camp. Wanna know what he said?

“Well…there isn’t really anything in town. But, if you don’t mind riding 6 more miles in the dark, I live on 10 acres, and you can camp next to…one of the waterfalls." Yup. Bill got his wish. Miles biked: 58.77

Thursday morning started with a trip back into Lyndonville to the Village Sports Shop to repair  Bill’s blown spoke, breakfast at Miss Lyndonville's Diner and some great advice for stops on our way to Stowe.
As we headed to breakfast, I noticed a truck at Trout River. Guess what? The brewer was in. Passport was stamped.

Let’s hit the other fine points of today, shall we? Discovered Vermont Maple Soda, explored the BIZARRE world of Bread & Puppet (Keep Vermont Weird), enjoyed Heady Topper with fellow cyclists on the sidewalk in front of the Buffalo Mountain Food Co-op, missed the turn to Hill Farmstead Brewery due to downed signage, made it in the nick of time to enjoy a flight from Rock Art brewery, met a cyclists who’s dad is from Youngstown (my hometown), a waitress from Medina and oh yah. Bill got a flat. Oops.

Our Stowe digs: When we were searching for a place to stay in Stowe, our aim was to find a place for 2 nights, so we could do a loop over the Notch sans our gear. I headed to Couchsurfing.org…and when I saw the folks who hosted us, I knew it was meant to be. Our hosts source most of their own food, raise chickens, pieced together 2 old VT homes and rebuilt them on the property that their grandparents originally owned. Said grandparents started the first Ski Inn in Stowe (still on the property). He is an ex-pro cyclist, their (adult) children are competitive cyclists…and? They are both former members of the U.S. Ski Team. Um? HELLO?! The other serendipitous event of the evening? A fellow couchsurfer was there too. Originally from Youngstown. Miles biked: 75.31

Friday: Smugglers Notch…SANS GEAR! (however, we still encounted Push The Bike Part II for the last 3 switchbacks) But the fresh mountain spring before the top and the EPIC flight down were WORTH IT.
We rode through small towns, did tastings and snackage at the Boyden Valley Winery, Maple Creamies at a sugar shack, beers in Johnson, a few yoga moves on the Long Trail bridge and had a scenic and GRUELING ride along the ridge back towards Stowe.

Dinner was at Crop Bistro & Bar’s other half: The Crop Bistro & Brewery (yes…they are partners!) Local and seasonal food, CB&B is housed in the former spot of the Shed Brewery. Unfortunately, they did not have their brew up and going yet…but it was ok. We had plenty of other local liquid to enjoy. We even made a stop along the way to grab a few for the night. And we enjoyed them while listening to the rain on the metal roof. Miles biked: 50.74

Saturday: Time for the Alchemist! Oh Heady Topper…how I wish you were sold here in Ohio! But first? Another great breakfast from our host, a couple of stops at Stowe bike shops for fun, a Cider Mill, a winery…and: Ben & Jerry's. Hello ice cream tour! Hello Free ice cream!

Ok. Tour done. And a half of a mile from the empire of ice cream? The Alchemist! Love Love Love Love LOVE! (Did I mention that I love Heady Topper?) Small brewery. Releases just 2 beers at a time. Free tastings. I bought a T-shirt :) Lunch was had at the former Alchemist Pub, which is now Prohibition Pig in Waterbury. A stop at the bike shop for fun and advice on a good route back to Shelburne, and off we went! And along the way? Another flat. Ha.

We rolled into Shelburne, and set up our tents…cleaned ourselves up a bit (hello dirt roads!) then headed into the fabulous “smallest big city” of Burlington. It was quite busy, which may seem unusual considering school is out of session (there are 3 colleges in Burlington)…but Sunday? There was a marathon. (Which? I stayed AWAY from. I hate running!)

We visited 3 breweries: Vermont Pub, Three Needs and Zero Gravity. We visited a great German Bier market, Das Bierhaus – which served Trapp Lodge brew (We didn’t make it to the Trapp Brewery in Stowe unfortunately). We strolled along what I dubbed “East 4th street on steroids” and enjoyed a night of bustling activity and people watching in Burlington. Then headed back to camp to sleep it all off.
Miles biked: 48.34

Sunday: It came way too soon. And that meant it was time to endure the 11 hour drive back to CLE.
BUT, because we are part of the Bike Cleveland National Bike Challenge…we DID pedal around the campground to transport ourselves to the shower house. :)

On our way out of Vermont, we stopped at Shelburne Farms  - 2 adults on a farm that allows you to discover the animals, boasts a local food stand with fresh made goods, cheese samples and a bakery? Like kids in a candy store! (Except. Now I want a pet chicken. I shall name him: McNugget.)

After the farm, we were pleasantly surprised to find Fiddleheads Brewery open too! So of course, a sampling was in order. And before leaving the great state of Vermont to head back to our beloved CLE? We loaded the car with $200 worth of Vermont beer. Over half of that was Heady Topper. Miles biked: .41

I miss Vermont. But I still have 3 Heady Topper’s left!