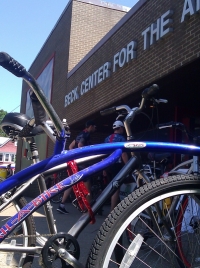 Bike to Work Week was a big deal in Lakewood, starting with the long awaited unveiling of Northeast Ohio’s first on-street bicycle corral, located on Detroit Avenue in front of the Root café, followed by Beck Center for the Arts first foray into cycling, the Bike for Beck event on Saturday, May 19.

The goal of this public event was two-fold; first to raise funds to help the Beck Center programming initiatives and second to raise the visibility of Lakewood's growing bicycle community, which works very hard to promote bicycling as a viable, safe and fun means of transportation within Lakewood and beyond.

Bike for Beck was obviously the result of ‘heavy lifting’ on the part of several local groups and individuals.  And from what I saw everyone had a great time.  The perfect weather didn’t hurt either!   The sheer number of people who signed up to participate in the 15-, 25- or 60-mile bike rides to help towards the fundraising goal was really encouraging for several reasons, one of them being the remarkable age cross-section.

For instance, to mention only a few, we had a couple of older women cyclists who are currently on a bike tour from Kentucky and a young couple from Columbus, all of whom went for the 60-mile ride.  There was also the father-daughterteam who completed the 25-mile ride!

Beck Center president Cindy Einhouse reports that 129 people signed up for the event. But there were also other cool Lakewood residents who simply stopped by the Beck Center, checked out the antique bike exhibit inside, grabbed some refreshments and much needed shade by the Beck Café and jammed to live music by “Fireside” and later on by the “Revolution Jazz Band”.

While all this went on, some happy volunteers at the Bike Lakewood table, namely Tatiana Roberts, Francisco, Erika Durham, and myself proceeded to greet as many returning cyclists as possible and help them securely park their bikes as they headed for a well-deserved cool down outside the Beck Café.  We also handed out information on local cycling events and signed up many riders and non-riders alike to receive the free publication you are reading right now, namely the Great Lakes Courier.  We ended with a 30-minute bike safety/maintenance demonstration by a most energetic and friendly retired Lakewood resident.

All in all, a pretty awesome time under a fabulous sky for a worthwhile cause.  Thanks to all who participated and to Mayor Michael Summers and Councilman Thomas Bullock.  And special thank you from me to Erika (!)  Until next time!