"Put the Brass:" A Man Brazes Excellence in Parma 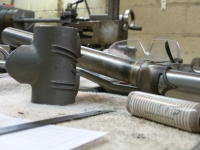 How many bicycles does Joe Bringheli make in a year? “Zero,” he replies, in a thick but smooth Italian accent. Zero?

In a squat, square, stand-alone garage atop a small hill on Pleasant Valley Road, an otherwise unassuming Parma resident is doing unlikely work- and Joe Bringheli is the first to admit it. “The area where you’re at is very important,” Joe says. Bringheli builds bicycles; his is a rare calling these days regardless of location, but especially surprising in Cleveland. There are certain places in the USA that offer frame builders a steady business- Oregon, Washington State, and several states along the mid-Atlantic- but Ohio riders aren’t a subset known for their interest in custom bicycles.

How does he make a living out of this tiny shop if he’s not making bicycles? In fact, Bringheli’s main business lies in the tools that he makes and sells out of his shop, including handmade frame jigs, fork brazing jigs, and tools for bottom brackets and dropout alignment. He’s also a distributor of Columbus and Dedacciai tubing, so many of his customers- who send orders from all over the United States, as well as from international locales- are hobbyists, collecting tools to support their own projects.

The success of the sales of his hand-made jigs and tools, however, is not to the exclusion of his frame building excellence. While in 2010, he says, he took no orders for custom frames, 2011 saw the sale of 8 bicycles- 6 of which were the collaborative efforts of Bringheli and students eager to witness and participate in the birth of their new rides.

Bringheli started working with bicycles at age 10, fiddling with basic repairs in the company of a childhood friend, Maurice. Even after a move to the United States in 1976, Bringheli continued metal-smithing and frame building in several locations; he’s been working in his current studio since 2001. Cycling is enjoying a growing popularity in Northeast Ohio. However, despite his 11 years of work in Parma (and over 20 in the United States), Bringheli’s careful craftsmanship and the resultant quality of his bike frames beat on a low frequency, just out of the public earshot. The presence of big-name bike companies- and the growing ubiquity of bike shops that sell them- offer customers the opportunity to ride their purchase home. A custom Bringheli frame and fork costs about $800, so it isn’t the price that deters people- some popular road bikes cost upwards of a thousand dollars. People would rather, Bringheli says, simply walk into a shop and leave with a bike- they don’t care so much about having a custom frame, or they don’t know that the option exists. However, Bringheli has found that advertising doesn’t offer much of a return in business, and chooses to rest with the respect and quiet fame that he has in frame-building circles in the US.

So what’s the draw to having a custom frame? In the basement of Bringheli’s house, two walls are stacked with various sizes of Columbus and Dedacciai tubing, another wall decked with lugs, steel cacti waiting to adorn a frame. He uses a process called brazing, as opposed to the growingly popular tig welding, so that his bike frames wear decorative detail at the seams where tube meets tube. For many, it’s an aesthetic that is non-negotiable when looking for a bike. Bringheli does not count himself as a craftsman, when it comes to intricate lugwork. “They are jewelry makers,” he says. “They spend 3 hours on a lug. I can build a bike in 3 hours” Bringheli does, however, appreciate the classic beauty of a lugged steel frame, gently making fun of himself and his contemporaries: “the old farts- we like lugs.”

There’s a lot of noise about the quality of the tubing on a bike; I myself remember agonizing over the brand of steel that made frame after frame in consideration as I day-dreamed about building up a new ride last summer. When I asked Joe about what he thought was the better tubing- Columbus or Dedacciai- he said, “tubing doesn’t matter to me. What matters is sizing; sizing and angles.” Just like finding pants or shoes that fit perfectly is an exercise in futility, so too is riding the perfect frame out of a bike shop. With a custom-built frame, the rider can be assured that the geometry of his bike was tailored specifically to his inseam, the length of his torso, the reach of his arms.

Sienna Zeilinger, for example, clocks in at just over 5 feet. Finding a frame that fits that height is no easy search. Even Joe admitted, “with Sienna, we had to fight,” and Sienna recalls being sized-up with a smile: “when it was my turn with the tape measure, Joe just laughed—I'm five feet, half an inch tall.”

Zeilinger met Bringheli during May of her junior year at Hathaway Brown in University Heights. The school supports a senior project program that allows 12th graders to step out of the classroom for the last month of school to experiment with a particular career or trade; alternatively, seniors can apply for a Strnad Fellowship, which encourages an extended apprenticeship in a creative art, allowing a girl to work side by side with an artisan of her choice for a year. “You can apply for a Strnad at the end of your junior year, and you've got to have a plan and a budget. I've been interested in bikes for a long time, but I really only got to figure out how they worked by taking apart the ones around me, which was starting to bug my family, understandably. I figured a Strnad would be a cool opportunity to build one from the ground up.”

Thus, in the late spring of 2010, Zeilinger started working alongside Bringheli, learning alongside her senior class mentor, John Verbos (who met Bringheli as a term of the Strnad Fellowship and ultimately wanted to learn his way around a bike frame, too) to braze and file metal tubing into a two-wheeled ride. “Learning to braze was awesome,” Zeilinger offers, enthusiastically. “It took a little bit of time to get the hang of it, and Joe did the trickiest, do-or-die parts for us, but I think John and I each got to do about 90-95% of the welding for our bikes. We did most of the brazing with brass, but we used a little bit of silver for the really small, tougher areas.”

Now at Brown University, Sienna has a bicycle that is perfectly, uniquely tailored to her size. Without the option of building her own, she would not have found a ride as comfortable as the one on which she coasts through Providence.

Without describing himself as such, Joe Bringheli is a man who favors a meticulous process over a fast- but often mediocre- result. His nuanced understanding and thorough knowledge of the trade enabled him, for example, to suggest a certain kind of lug for Sienna when her tiny frame’s geometry demanded specificity: “because of the crazy-limited angles, Joe suggested certain lugs from England, since they were the only ones he knew of that would work.”  His lifetime of experience working with bikes, spanning decades and continents, means that his knowledge of bike building and the world of cycling is about as rich and full as his workshop- stacked to the ceiling with ideas and tools, scattered with projects and warm with creative energy and verve. It is this enthusiasm- that of a lifelong artisan- that solidifies the difference between buying a bicycle and having one made. “The bike's awesome, and the experience was incredible,” grins Zeilinger. “I get a special thrill every time I hop on it.”